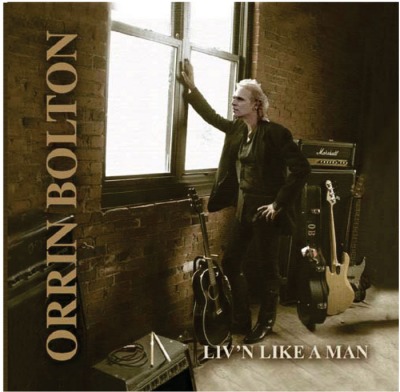 Looking forward to your review, Sylvia!

Happy that I could help, Sylvia, and that you were able to order Orrin's CD! I know you'll enjoy listening to it!

Congrats orrin, May all your hopes and dreams come true.

An article about Orrin and his new CD.  Gail

Orrin Bolton was living happily in Kabul, Afghanistan, exploring his spirituality, playing guitar and making plans to open an inn with his business partner. Then one day, he heard the rumbling of the Soviet troop transports.

In the ensuing invasion of Afghanistan, Bolton jumped in a cab and fled to Pakistan. He caught a train to New Delhi, India, where he was stranded and broke for nearly a year.

"Let me tell you -- being penniless there is not the same thing as being penniless in the United States," said Bolton, who was 24 at the time. "The whole experience was quite biblical."

Bolton has long been a world traveler -- trekking across southeast Asia, living on the Hawaiian oceanfront, recording in Jamaica, and playing in Amsterdam with his former band, Jelly Roll Jam.

It is these experiences that color the musical odyssey of "Liv'n Like A Man," Bolton's first proper studio album in two decades. The singer/guitarist will celebrate the release of the CD with a performance at Daniel Street in Milford and a dinner at the Stonebridge Restaurant on Wednesday, Dec. 29.

Bolton, a New Haven native, said it was these experiences that shaped him -- that taught him the ways of survival, the importance of compassion and the wisdom to follow his own destiny.

"The lessons I learned, even while I was stranded, serve me every single day here in the West," Bolton, 61, said.

On the title track of his blues-rock record, Bolton chronicles his international exploits, the excesses of his touring days and the fall-out over a broken relationship. But a lesson emerges: "To your heart be true, it's all here just for you," he croons in a gritty, thunderous voice.

But in the music industry, his claim to fame was his role in launching the career of his brother, Michael (yes, Orrin is the older brother of the soft rock sensation). Upon returning from India, Bolton rigorously pursued a record deal for his brother, visiting 24 labels before securing a contract with RCA Records.

"People realized Michael had a powerful voice and could write songs," said Bolton, who has worked with him on several tracks, including the reggae-tinged "Please Come Home."

Not surprisingly, fans have gushed to Bolton over his brother, a troubling phenomenon he calls "microwaving." Even worse, he's been mistaken for him.

Bolton joked: "I'll get into an elevator and the girl standing next to me says, `You're Michael Bolton!' I say, `No, I'm Orrin Bolton, his brother.' And she says, `Oh, I didn't know you had a brother!"

While his brother has seen massive success, Bolton has quietly cultivated his own career. At the age of 19, he was the lead singer of the Dutch band Jelly Roll Jam and in 1991, founded his own label, Rock'n Hood Records. He later released his solo debut, "Freedom," the title cut of which was licensed by High Times Magazine.

He recently returned from a trip to Nashville, Tenn., where he worked with friends of the late country singer Ben Peters and performed a fundraiser for a marine wounded in Afghanistan.

After reading Hermann Hesse's novel, "Siddartha," as a teen, Bolton knew he would "be in India one day." And while the strange, harsh trip was nothing like what he expected, the experience had a positive impact, helping to mold him into the man he is today.

"The more you get out there, the more opportunity there is for life to surprise you," Bolton said. "You can't have any regrets."

Permalink Reply by sylvie boisvert on December 22, 2010 at 3:22am
Wow, thanks for posting these Gail! Orrin's life story would make a fascinating book, don't you think? Maybe one day... I know I'd buy it! :D The review of the album was mostly positive and I think to the  person who hasn't heard of Orrin, makes him sound interesting enough to check out. Thanks again Gail, especially for copying the articles, you're  a doll! Take care. Hugs, sincerely, Sylvie from Canada

Yes Gail, thanks for posting this!

Here is a review of Orrin's CD:

Orrin Bolton, Liv’n Like a Man (Rock’n Hood Records, rocknhood.com, orrinbolton.com). Decades into a multifaceted music-biz career that’s taken him around the world as a performer and a backstage mover/shaker, Orrin Bolton’s double-sided claim to fame is that he’s recorded protest songs about marijuana reform while simultaneously being Michael Bolton’s brother. As it turns out, the bulk of Liv’n Like a Man, his second solo album, goes by before either of those points becomes noticeable. Bolton’s voice, which bears only rare and debatable resemblance to that of his famous brother, is seasoned and soulful — he’s the kind of singer who feels out each line with an actor’s knack for emotional delivery, and he hits those few climactic high notes with impressive clarity. Bolton’s talented stable of musicians excel at a kind of mature pop-rock, informed by classic soul, R&B and country (there are some smokin’ slide guitar leads here), sounding like learned veterans of the bar-band circuit. But ultimately, in spite of some recurring lyrical themes (travel and holding onto love both keep popping up), the results don’t hang together as an album. Its self-conscious eclecticism end up coming off more like a series of genre exercises (there are also a few ballads, some roadhouse classic rock, some reggae), and while Bolton clearly understands pop songcraft, he’s not distinctive enough as a songwriter to make all those genre forays sound of a piece. The inclusion of a few songs from his first album, Freedom, are ill-advised, too: Without the platitudes in “Everything Matters” or Bolton’s stab at Jamaican-accented toasting in “She Don’t Let Nobody,” he’d have a much more respectable record here. But aside from those missteps, Liv’n Like a Man reveals, more than anything, a well-practiced entertainer demonstrating his gifts with confidence. —Brian LaRue

My mail has just arrived - Orrin`s CD was there - I had to do this immediately to thank him for the dedication - it`s beautiful - his use of one word makes it so, so, so SPECIAL - because only a few know exactly what it means - away to listen to it now and hopefully will, eventually, find my way onto that web page!    :D.

Have listened to Orrin`s CD - have read your kind words to the reviewer`s comments and as usual, Sylvie, you have been kind and sweet and even magnanimous, totally diplomatic and democratic BUT, as far as I am concerned, parts of his anatomy would no longer be where they are - a cute wee bow and a cigar come to mind.  lol.   Hey, you didn`t know I was a fascist, as well, did you !!!!!    LOl, LOL, LOL.

P.S.   Thanks too, to Gail, for above inclusions.

Hi Sylvia, well thanks for the compliment! About the review, I feel it’s one person’s opinion and it is mostly positive. As Michael has said in the past, “some people just don’t get it”. The best example of that being “Everything matters”, because it’s a great song and holds a deep meaning for me. I wouldn’t be here talking to you about Orrin if everything didn’t matter… As far as Orrin sounding or not like his brother, one of the first things I’ve said to him was that I appreciated that he was his own person. Anyway, very glad to hear you’ve enjoyed his CD sweetie. Orrin will be glad to hear it when you post it on his site! Take care Sylvia and keep warm. We’re having a warm day here: a high of -3 Celsius for the day!  Hugs, sincerely, Sylvie from Canada

Glad you got Orrin's CD and enjoying it!!  I listened to it last week and will hear more of it after the holidays!!

Hi Sylvia, so glad to hear you got your Christmas present from the post office! Sweetie, I think it would mean a lot to Orrin if you write to him and tell him how much you enjoy his album after you’ve heard it. You have made it to the site before so see no reason why you couldn’t again. If you feel a pressing need to share, all you need to do is E-mail him directly at: ROCKNHOOD@aol.com