For those who havent seen these images of when Michael was awarded his Hollywood star on the walk of fame on the 27th August 2002. 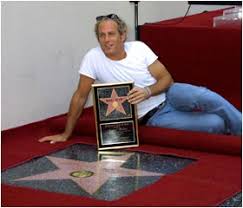 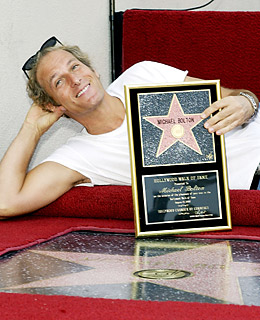 And just incase you fancy visiting Michaels star, the address is-

For Sylvie and Robin, the photos I've posted are from top to bottom-

Michael is lying down on the red carpet in front of his star and is propped up on one hand. He is wearing a white short sleeved T-shirt and faded blue jeans and has his sunglasses propped on the top of his head. He is wearing the same outfit in all photos.

Second photo shows Michael posing with Chuck Norris. Chuck is wearing a pale blue denim shirt and is standing to Michaels left and has right arm round Michaels shoulder and his left hand holding the bottom of Michaels star commemorative plaque and Michaels right hand is holding the side of the plaque.

Fourth image is of Michaels star as it is set in the pavement.

Fifth image is of Michael lying down propped up on his right elbow with his head leaning on his right hand laying on the red carpet in front of the star. He is holding up the wooden commemorative star plaque in front of him. He has a huge smile on his face as if he is giggling. Again, his glasses are on top of his head.

Now that is a great series of photos and a wonderful memory for me Jennifer!!! That was a very fun day for me and several BB's!!! To watch Michael get his star and then attend the after party!!! That was a definite Bolton Adventure I will never forget. Michael signed one of my Bah Bah Bah records at the party and me and my friends took photos with Michael and another photo with Nicolette :) Wow...brings back great memories indeed!!!

WOW Kathy thanks for sharing that Bolton Adventure for that certainly must have been a terrific day as I bet Michael was on his own Cloud 9 then and I bet those "smiles" were really something to witness !!! :)

Here is another little picture from the same  day that I rather like and at least they have just about managed to miss MB's face with that horrible Getty Images.....hope you all like too !!! :) 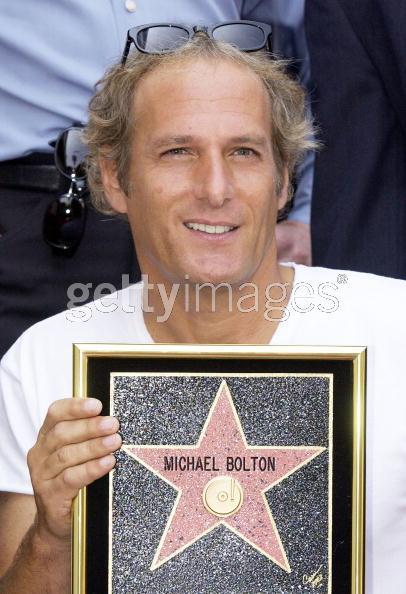 Ahhhhhhhh.....he looks wonderful in this photo!!!! He was in GREAT spirits on that day Sylvia. I remember chatting with an actor who was acting in the movie that Michael was producing and acting in. He was encouraging us to keep an eye out for the movie....lol  Well maybe next time Michael. I believe it was a suspense movie of some type. Funny...just remembered that conversation :)

Thanks for sharing Kathy R...Wonderful that you guys got to do all that... Must have been an amazing adventure, something different!! I remember later after that back here I saw someone's pics from that event and said MB was so proud!!! And everyone there was also!So cool. A friend of mine went out to CA later and took a pic of the star..Thanks so much for sharing!!!

Great to recall all those fabulous times and I bet they still feel like yesterday Kathy and it must be a wonderful thing to be able to look at that pavement with all those terrific "stars" on it.....it must really be great to see it all and I am glad MB has got his own "star"  for it is a very well deserved one indeed !!! :)

And to think it is all right in Bob's fire district!!! Too much fun :)  The photos above brought back all those wonderful memories :)))))

You don't remember the name of the movie or who was in it?  I remember one movie I have on DVD that I was so shocked to see Michael produced!  I looked it up, and there are a few others he has also produced, but it doesn't say he has also acted in any of them.

The Other Side of the Tracks (executive producer)

2001 Good Advice (executive producer) Really cute funny movie with Charlie Sheen, Angie Harmon and Denise Richards.
I have not seen or heard of the other ones. Check out this info and more about MB on IMDB.com
Michael Bolton - IMDb

Thanks, Joy for all these links.  IMDB makes for some interesting reading on MB.

For the life of me I can't remember Joy!!!!!!!! The actor we fans were talking to was NOT Charlie Sheen...lol  I am certain that Michael was going to act in it because that is when the hair cut came into discussion. I vaguely remember something about suspense or mystery and Michael some kind of agent or something :/ I will go through my boxes of Michael items and see if something in there will trigger my memory!!!! This would be a great question for Michael for my next Bolton Adventure!!! LOL It definitely wasn't a documentary. Thanks for all your research there!!! Hopefully I will uncover a clue or two.

Sounds like a great time, Kathy!  I didn't know Michael had a star!  Some follow-up questions for you... What is a Bah Bah Bah record?  Whatever happened with the movie Michael was producing and acting in?  Did it ever come out?  If so, do you recall the title?

Thanks for filling me in!  Anyone can answer...!