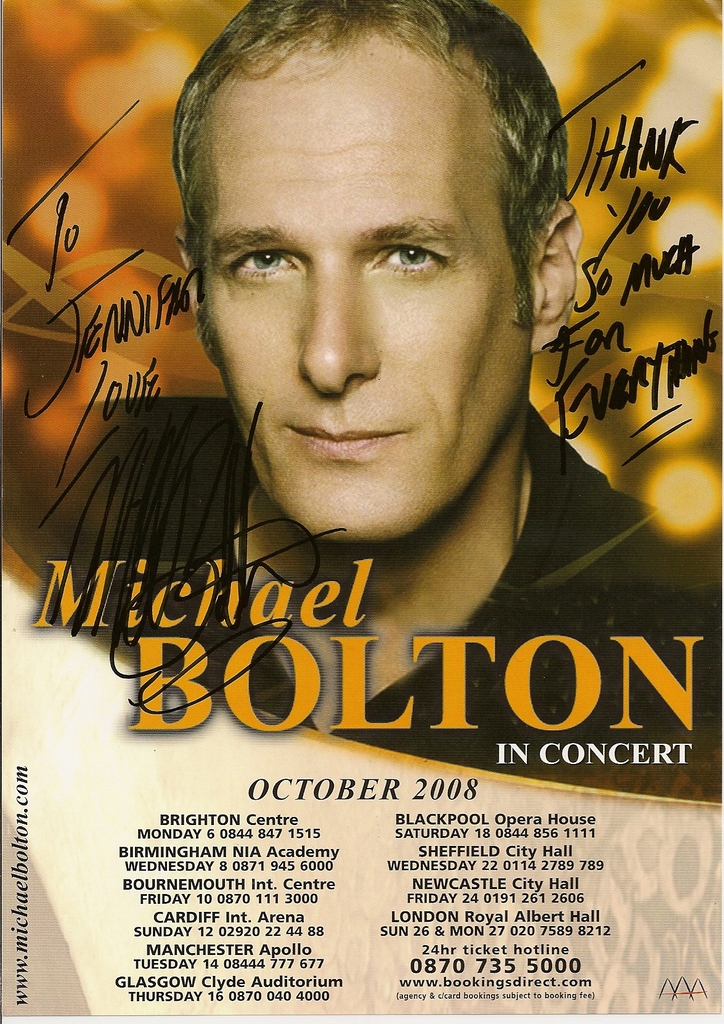 Can you see this picture?

I think it might be IE9 causing the problem. Typical isnt it? I thought it was my virus software, so I bought a new application for all of my pcs' and its still doing it, so it can only be IE9

This is the only one of my PC's that doesnt have IE9 because its too old and would probably have a complete breakdown if I tried to install it!!

Let me know if you can see it ok. I can see it, but with my luck today, you probably cant!!

Has anybody else has problems with IE9? I'm finding that its slowing my pc down a lot. I'm going to try chrome for a while, see how I get on with that.

Permalink Reply by sylvie boisvert on July 4, 2011 at 5:34pm
Hey Jennifer, no sweetie, I'm sorry, I can't see it! ;D But to answer your question about Internet 9, yes, it's very troublesome. My computer teacher told me that even Jaws 12.0 has trouble with it. A few weeks back, my son did the usual updates and my Jaws 9.0 didn't have access to some form fields like my "reply" buttons in my forum in-box or YouTube and suffice it to say I wasn't a happy camper. What my son did was to restore our internet to Internet 8 and it went back to normal. Break a leg! Take care sweetie. Hugs, sincerely, Sylvie from Canada

I can see the photo. I use IE8 and am glad I don't have 9 on here.. I have no problem for the most part uploading pics...Good luck

I was going to tell you I couldn't see it Jennifer - just being the normal rotten wee sod that I am - but seeing Robin has come in and said she can see it, I thought I had better not tell you any porkies and add to your stress levels but Jennifer how did you manage to get a picture of Michael in the nude for I do hope you realize that is the one you have published !!!!!!!!!!!!!!!!!!!!!! LOL.   Okay, okay - don't shout at me - I'll behave myself for five minutes at least !!!!!!!! LOL.

Sylvia, you have really made me laugh today for the first  time on this very stressed day......thank you. Ha Ha!! As if I'd upload the nude photo?? Tut tut!!I  Surely, you know I'd keep that all to myself wouldn't I? Ha Ha!!

Right, so, I know that IE8 will let me upload images so now I'm trying chrome. Lets see what happens here? If you can see the photo, it is of an orange Dorothy Crab and  dark orange Ronald Lobster lounging on my wooden garden table. These two guys are permanent residents on my decked area. 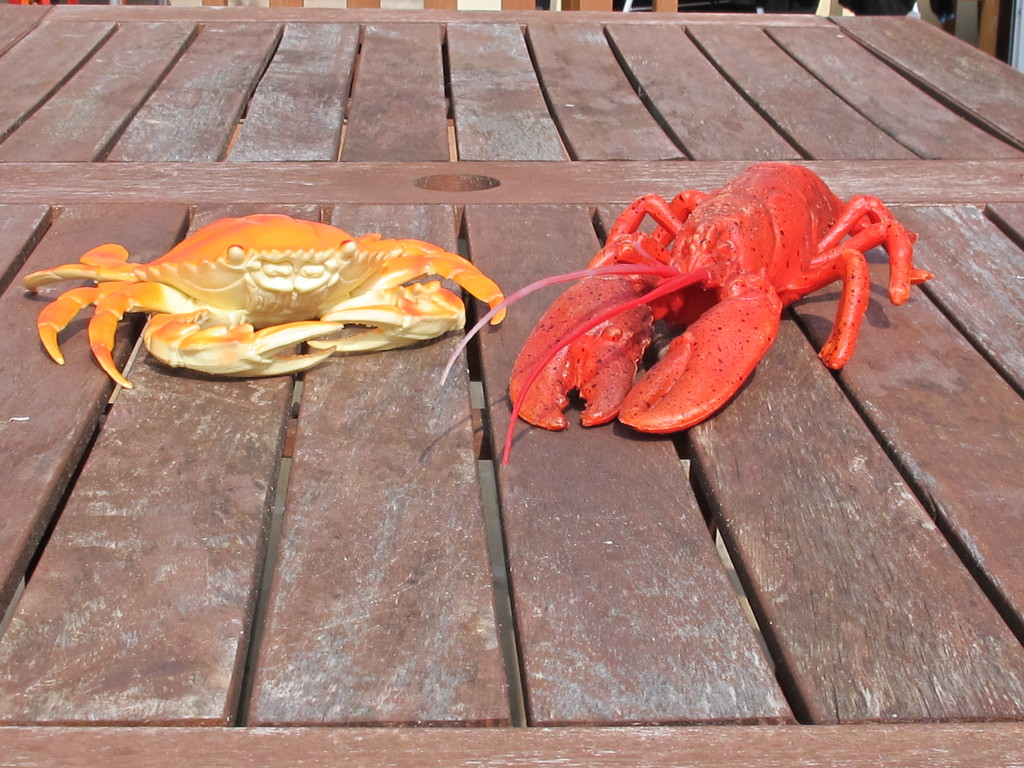 Oooh crikey, I can see it!!! I just hope your guys can too!

It's funny, but in IE9 this site doesn't load properly and sort of stretches itself down the page so that the header is at the top, but the threads are right down the page!!

Chrome is also doing a spell check as I am typing and I am adding unrecognised words to my dictionary the same as in word?!! Wow!! Impressive!!

Thank you to Sylvie and Robin. I've decided that I don't think I like IE9. I've never had any problems with IE before, but for now, I am totally sold on this chrome..its brilliant!!  I might stick with it or I might restore back to IE8, I'll see how the fancy takes me (or more likely if I have any further problems!! LOL)

Sylvie, the photo was of a mini UK tour poster that Michael wrote the message 'To Jennifer Thank you so much for everything, Love Michael Bolton'.

Glad I made you laugh for stress levels are something we all need to cut down on !! :)

To let you know I can see your picture fine of that crab and lobster but as far as all the talk about IE8 and IE9 and chrome and everything else - I pass - I've got a laptop and it is black and I plug it in when the battery gets low and Jack Sparrow himself could be inside it for all I know and that is my contribution to the discussion about computers !!!! LOL.

Jennifer, I can see the photo just fine and I have IE9....no problem with it on any of my PCs at all. They are also running Windows 7. I think IE9 is much better/faster than the older versions. My virus software is Norton 360.

Permalink Reply by sylvie boisvert on July 4, 2011 at 9:49pm
Hey Jen, thanks, I think I have that poster, bought it on EBay a few years back, not that I know what it looks like... :D My son loves Google Chrome, he swears by it and he does a lot of uploading and downloading and such. Take care Jennifer and good luck! Hugs, sincerely, Sylvie from Canada

I have computer's in my house running windows 7 and I install IE9 on mine I had to back date it I HATED IT!!!!!

Needless to say I told the rest of the household not to bother!

Just my opinion but I think I will stick with IE8 :)

Thanks everyone. Your help here is gratefully recieved.

Hya Dianna, Im glad its not just me then?? Ha Ha!!

Anna. I have exactly the same combination set up as you? How strange that mine doesnt work, but yours does? I wont say anymore, I dont want to jinx it for you. Ha Ha!

Like Sylvie's son, my eldest lad swears by chrome and keeps telling me that he warned me about IE9 and how awful it was!!

Now I know that its my explorer causing the problems, I will delete this thread in a day or so.

PS Sylvia, sorry, I didnt mean to 'bamboozle' you  when I speak of IE8 and IE9 and chrome, these are the built in applications that allow you to accesss the internet.

Internet explorer 9 has just recently been launched and it is supposed to be faster, better and more accessible but for mei ts been nothing, but problems!!

So in short, which ever explorer you use is down to personal choice. If your works for you, stick with it girl, you're doing good!! Ha Ha!!

Thanks Sylvie and Jennifer for the "pat on the back"  but it will take a lot more than that to convince me I know what I am doing and yes I do have one of those blue "e" things on my screen it reminds me of a symbol that should be on a car at it's "big end" ...I never knew a car had a "big end" until mine went on a car I had and I took into my local garage and the fellow said to me it is "your big end that has gone" and I said to him;  "overly familiar, aren't we, you don't have to be so pass remarkable"; needless to say I had a certain nom de plume for years after that at that garage - och well, what is life worth if you can't have a laugh at yourself and it !! :)

Permalink Reply by sylvie boisvert on July 5, 2011 at 1:26pm
Sylvia, I love you crazy girl! lol My boys are probably asking themselves why crazy mom is laughing to herself this early in the morning... Thank you for the laugh, God bless you Sylvia and have a great day! Take care. Hugs, sincerely, Sylvie from Canada