Thanks for confirmation Gail, thanks !!! :)

We have a mini South American tour coming up.  Here are the dates.  Will post on main page as soon as I get ticket links and the venues have announced.

Thanks for info Gail, thanks and know many who have been waiting on these ... happy times in South America for sure !!!! :)

Here is another getting ready to be announced.  Get info posted when I get final ok.

As a heads up and ONLY as a heads up for this information NEEDS to be confirmed by Michael's management and Gail is in the process of either getting that confirmation, or not, as the case may be but because have been told tickets go on sale Monday, at 10.00 am posting details on here so that no one misses out on chance of good seats.  Please remember if you buy on Monday without confirmation being received then that is up to you but hopefully we will know, one way or other, before Monday.

There are two posters covering the tour, one of which is a general one and other gives dates and venues for each show.  The shows will take place in Woking, Oxford, Manchester, Liverpool and Sunderland and tour will run from 7th - 14th February.  Tour is being called "An Audience With Michael Bolton - My Life Story" and will take the form of Michael, being on stage, TALKING about his life.  I presume it is going to take the form of an interview which Michael has done before but not as part of a tour..... remember the Valerie Smaldone live/audience interview https://youtu.be/huxX6YRR5Ng  as an example.

Have to add that do not have information on proposed length of each show nor details on cost of tickets, have only been given following link which have been told will go live on Monday   http://m.atgtickets.com/   Can confirm this is the ticket outlet for each venue.  Here are both posters giving details about tour and hopefully, hopefully all dates will be confirmed and Michael will head to these shores again in February .... fingers crossed folks it ain't one of the biggest hoaxes out !!!! 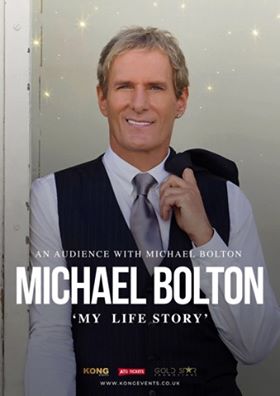 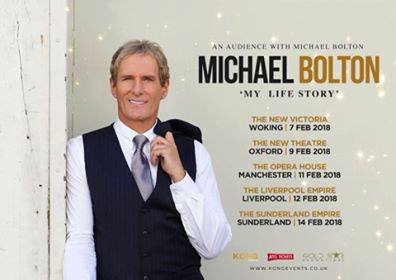 just waiting for the confirmation, fingers crossed for this! :-)

This is confirmed and waiting for a bit more info and internet service due to a snow storm and I’ll post . Can’t do that from my phone !

Exciting!  Something a bit different.  Presumably he will sing at some stage.  Hope he will take questions from the audience.

Good to read you on here again Margaret and indeed something different and looking forward to.  Good luck tomorrow morning and getting tickets you want.

Sorry didn't come on earlier but unfortunately I am back to not getting any notifications from the site for nothing that either you nor Gail have been in here.  I just came in to look up details about something and spotted your name against the forum category Margaret.... oh well, back to looking round everything making sure don't miss something !!! LOL

I lurk here all the time, Sylvia, but rarely post anything unless Michael is coming to the UK.

Had difficulty with the ticket site this morning, just kept hanging, but on the fourth attempt I've managed to get a Platinum VIP package at Woking.  Husband is a wee bit shocked at the cost of my Christmas present this year, but, Santa, I've been good!

Actually, I was somewhat rash in booking this.  I was just looking to get a good seat, have no idea at all what this package includes, and can't find out anywhere what's included.  Anyone know?