Yes I would say so Robin

I loved the fact that Alan Jones played such a variety of Michael's Music and Thank the lord he didn't mention his hair once LOL!!!!!!!!!

Sounded like he admired the man and his music

I missed the first minute or two.. What did they say in the very beginning? Thanks!!!!!

Great interview of what I heard..Nice station and streamed perfectly!! I love RealPlayer!! :)

He is mentioning him again now and what a wonderful human man Michael is, mentioned the new Cd and Tour Dates again

I loved the interview very much

Ok thanks, it was short but a good one! Thanks everyone for the info on how/when to listen!!!! I was outside most of this day and just started reading on here and realized I better try it NOW or miss it!!LOL THANKS!!!!!

Looking forward to hearing about your show in the spring Dianna! I know you are so excited.. Don't blame you!!!!

At the beginning Alan Jones was complimenting him and he said about how he was immaculate and what a powerful figure he was although very slight in stature - something like that - but Michael started laughing and saying he was taking a note of everything Alan had said so that he could use all the compliments in the future and at least waken up tomorrow morning and look at what had been said about him and realize how wonderful was....he was certainly on fine form for 8.30 in the morning.....at the very, very beginning when Alan went to start talking so did Michael and Alan told him to be quiet because it was his turn and Michael laughed - oh what a beautiful sound and it was a hearty laugh too !!   What a great interview and good publicity too with the variety of his music that they played and it was good listening to the amount of adverts they had on for his show next year....oh well that is it all over need to see next if we can get the link for him in Germany when he does his interviews there although I think some of those are television interviews he is going to do....wish him well in the X Factor Show for Tuesday and hope that Susan has calmed down by then !!!!!! LOL.

Thanks, I missed those very beginning moments, I appreciate it...good interview!!!!!!! :)

Hi all, it worked perfectly for me too, didn’t miss anything either, woohoo! Can you believe this: a symphony tour?  How lucky Australians are! I wonder if he’ll do the same in Germany... I think that’s what they mentioned in the beginning Robin and Michael kidded around about writing down every nice thing Alan said. Then they talked about him touring with David Foster and Russel Watson, saying he went through hell and back. Michael asked: was he married? Lol   I wasn’t aware that Russel had had the big C. Then they talked about the Marina Bay, where he was staying and the cancelled show in Bangkok. Then his tour schedule, he’s doing promotion in Germany, so I’m guessing that’s good news for a tour next year.  Then Alan played “Reach out” and that’s probably where you came in. So there you go sweetie. A very nice interview indeed. Take care and hugs to all, sincerely, Sylvie from Canada

Thanks Sylvie, I missed about half I guess..Hope we can download it so I can hear it all at some point. Great interview. THANKS!!!

Hi girls, now first Robin, I hope they can have the interview to download for everyone and you’re welcome for the details. My son recorded it for me but I think it’s too big to be uploaded to the site since there’s a size limit for uploads. Now Sylvia, thanks for the info about Russel Watson, wow! Well good for him he made it through! Now Dianna, I can understand you feeling a little sad: Alan even mentioned the Brisbane date on the 24th... But as you’ve said before: everything happens for a reason and you have to believe it sweetie. Take care and hugs to all, sincerely, Sylvie from Canada

The tickets for the Australian tour actually have printed on them Sylvie, the Australian Symphony Tour and they look beautiful tickets...someone in Australia (not Dianna) had taken a photo of hers and put it on FB a few days ago !! :)

Russell Watson was very ill a few years ago...the first time was he was diagnosed with a brain tumour and it was successfully removed and he went through chemo and radiotherapy and then about a year or two years later he was touring and he suddenly got fantastically bad headaches and he practically collapsed while he was travelling and he was rushed to hospital and it was that he had another tumour and that time was life or death so much so he wouldn't allow them to start the operation until his two daughters had managed to get to the hospital so that he could say goodbye to them and with that one too they wondered if he would ever be able to talk let alone sing again because they had to go in round all the vocal chords....with our news broadcasts it was very much a case for a few days expecting to hear in the next one that he hadn't made it and, of course, still with anything like that he lives with the knowledge that it could return ......maybe that is why I have a big soft spot Sylvie for he has fought and worked hard to get back to where he is today !!

The interview was great though wasn't it - terrific hearing him live and that beautiful hearty laugh - great !!!! :)

I have this Morning Recieved all My tickets

Even to the one that was cancelled

Made me a little sad to be truthful FRONT ROW GONE :( 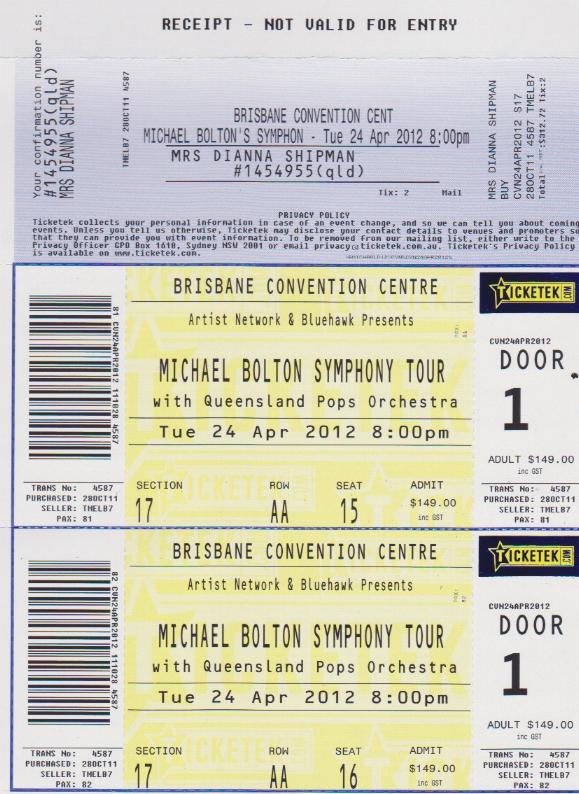