Here is another link into article about Memorial Service, which I presume is similar, and Sally posted it to my Timeline for me on FB and I have no difficulty accessing and below link I have copied article !!! :)

Ted Danson, Jennifer Flavin, Bobby Kennedy Jr., Ted Sarandos and David Foster were also among those in attendance at the June 19 memorial.

Legends from the worlds of politics, music, television and film came together on Friday, June 19 at the Skirball Center in Los Angeles to mourn the death and celebrate the life of late television producer Michael King.

From President Bill Clinton to Sylvester Stallone to Don Henley, the stars came out in full force to pay tribute to a man who not only built a TV empire, but according to the evening's speakers, was a loving father, friend and philanthropist.

King, whose company King World Productions spearheaded the syndication of Wheel of Fortuneand Jeopardy and created The Oprah Winfrey Show and Dr. Phil, died suddenly on March 27 of complications from pneumonia at the age of 67, leaving behind his wife, Jena, and children Ali,Audrey, Teddy, and Jesse.

The evening commenced to the tune of "Amazing Grace" on bagpipes, followed by a touching speech by King's friend, former President Bill Clinton. "If the length of our lives were determined by merit, he would have lived to be 150," Clinton told the audience of close to 400 friends and family.


After hearing emotional speeches from King's oldest children, the already teary-eyed crowd listened to a song by saxophonist Kenny G, which didn't leave a dry eye in the house.  But as Michael's brother Robert then told everyone, "He would not want us to mourn his death, he'd want us to celebrate."  And so, the festivities commenced.

Producer and friend Jeff Wald kicked off the laughter, saying, "I was worried about going on after President Clinton, then I realized I couldn't do worse than George Bush."

Legendary producer Norman Lear followed up with, "There are people all over this town who would die to put a crowd like this together."

Though he was joking, it was a crowd that King, who was often compared to P.T. Barnum, would have loved to see.  In the audience sat Ted Danson and Mary Steenburgen, Stallone and Jennifer Flavin, Bobby Kennedy Jr., Netflix's Ted Sarandos, producer Lawrence Bender, Joe Walsh andDon Henley from The Eagles, Tommy Chong, attorney Robert Shapiro, and David Foster.

Person after person spoke of King's generous heart and his love of life. Via video message, Oprah Winfrey said of King, "Here was a man who really knew how to live.  He didn't just live big, he lived huge."  Added Danson on stage, "I really felt Michael got to experience the joy of what it means to be human.  He got to love and be loved."

More video messages of love came from Elton John, Whoopi Goldberg, and Sugar Ray Leonard, and the service wrapped up with a performance by Michael Bolton.  Foster was last to speak, saying "I don't deserve to have the last word, so let's do this right.  Everybody get up, scream, shout, and stomp your feet so wherever he is, he can hear us right now."  The room trembled with noise and excitement.

In the end, even though King will be remembered as a genius businessman, it was his son Teddy's words that resonated the most.  Said Teddy, "Until I was 12 years old, I didn't know what his job was. I just knew that he was my best friend."

Another link into article about Michael King's memorial and believe this article maybe same one Gail posted link to for it does come from the HuffingtonPost and it has just been posted on Twitter....

Had a great Father's Day in LA with Holly and baby Dylan!!! Love my 3 daughters and grateful for their beautiful children!! 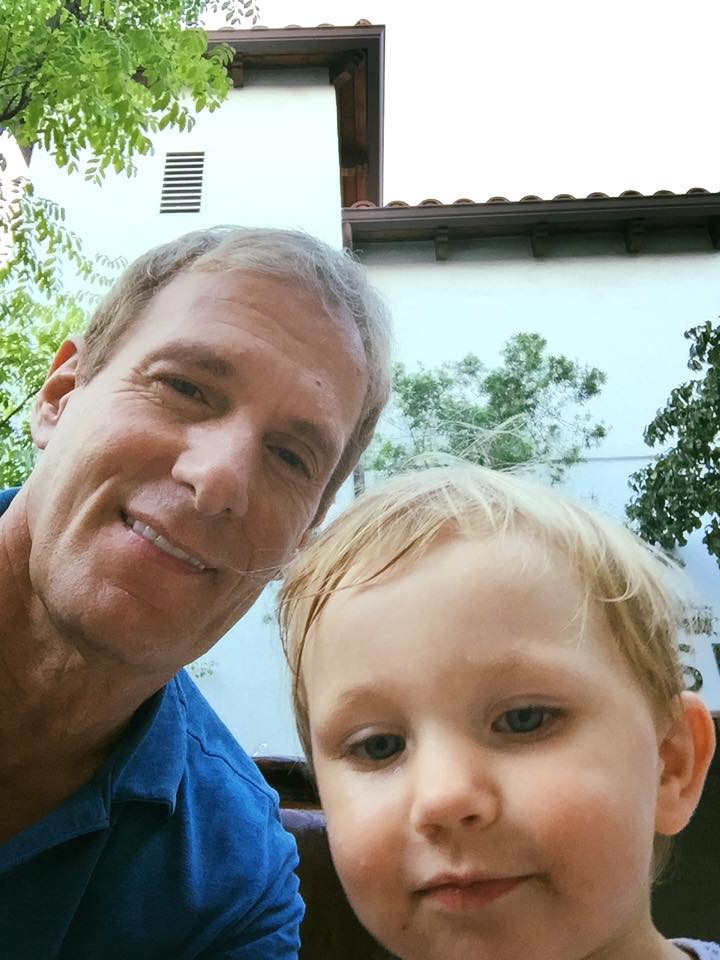 Thanks for bringing over Gail and it is beautiful photo and Dylan just gets more and more like his dad every day although there is something of Holly in him too.....he is a gorgeous little boy and that is what he is now, the baby, has gone !!! lol

For Sylvie and Robin it is an exceptionally close up photo of faces for the only real body part you can see is part of one of Michael's shoulders and that is it.  Michael is very slightly behind Dylan and to his left side and believe it is a selfie he has taken but the bottom right hand three quarters of the picture is of Dylan's face and he is looking down at something and there is just the faintest hint of a smile on his face.  In middle of pic on left side is Michael's face and he is leaning slightly back because he appears to be looking in screen to make sure he has all of Dylan's face in the frame.....well....that is how I read the picture !!! lol

It is an adorable photo Gail, thanks for posting over here. Just saw it over on Twitter and FB. MB and Dylan hanging out, cute!!! The little guy is not a baby anymore- he will be soon 2 in early Sept.  Time flies.

I am glad MB had a chance to relax and enjoy family time on Father's Day!

Michael has just sent tweet along with photo of himself in a recording studio and he is leaning over part of equipment which has a bowl of M&M's sitting on it and he has his arms draped either side of the bowl. Here is his tweet....... lol Someone told me there were no blue ones, or there were none when Michael had first said it in "This is Michael Bolton", I love it! XD Thanks for sharing Sylvia, take care. Hugs, sincerely, Sylvie Qc Canada :D

YES I remember about that too Sylvie. I tweeted MB about that in reply too him posting this on