Here's better pic of one of the ones above which Zimbio has published and which does not contain a watermark right across Michael's face .... 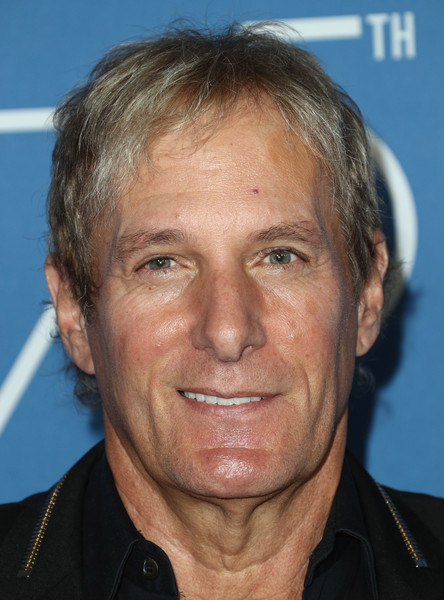 Rest of post has Instagram a/c names of the rest of the panel you see in pic with Shonda Rhimes being the first girl on left in back row.  The panel consisted of R.P. Murphy, Jill Soloway, Norman Lear, J.J. Abrams and David Kelley. 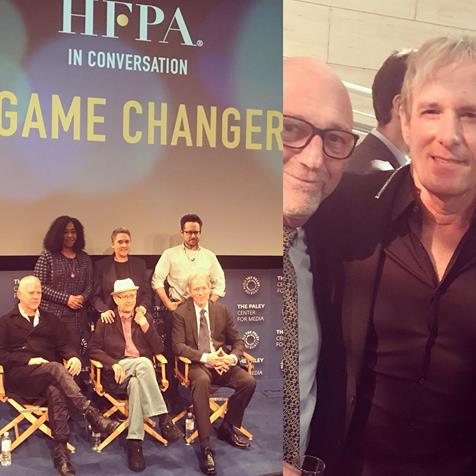 Here is a great article from Billboard about Michael's music.  The ranked his top 10 in their opinion and had a lot of great things to say about him..great to read.

There’s no mistaking the vocal power of one Michael Bolton. The singer, who started his recording career in the mid-1970s, hit his musical stride beginning in the latter part of the 1980s with a stunning mixture of soaring ballads and cover versions of songs that inspired him -- and the rest of us -- such as “To Love Somebody,” “Drift Away” and “Sittin’ On The Dock Of The Bay.”

Critics have sometimes accused Bolton of dipping into the covers well a few too many times during his career, but the singer knows it’s one of his strengths -- one which his loyal legion of fans have never seemed to mind. But, the singer also knows a winning original lyric when he hears one -- or writes one, as these 10 essential performances that Bolton has made all his own prove!

By 1998, the chart numbers of Michael Bolton had slowed down considerably when compared to his glory days of the early part of the decade. Still, one shouldn’t discount his later work simply because the hits weren’t as huge. On this 1998 single from All That Matters, the singer demonstrated a vitality and energy that was as apparent as on anything he ever recorded. And, the lyrics evoked pure romantic dedication -- a hallmark of the Michael Bolton song catalog.

The first major hit single for Bolton from the pen of Diane Warren, the singer also shares writing credit with producer Desmond Child on this brilliantly written (and produced) plea for emotional stability in a relationship. At the point of this song’s release in the winter of 1990, the singer had deservedly earned a reputation for being one of the top ballad singers in the business, but this song showed that Michael Bolton was no one-trick pony.

There were few artists more bankable on the adult contemporary charts in the 1990s than Michael Bolton, and this 1991 hit was among his biggest, topping that chart -- and hitting a peak of No. 7 on the Hot 100. Once again, the singer turned to the highly esteemed Diane Warren for the track, which also served as the title cut from his most successful album -- selling over 8 million copies in the United States alone.

7. Michael Bolton - "That’s What Love Is All About"

After a decade of recording, success finally came Bolton’s way with the 1987 release of The Hunger. At the centerpiece of that set was this beautifully worded ballad (written by the singer with Eric Kaz) that became the first major Michael Bolton song hit. The song hit No. 3 on the adult contemporary chart, and made the Top 20 on the Hot 100, serving notice to the musical world that an artist who would stake a reputation as one of the top song interpreters of the next decade was about to take flight -- and indeed he did!

It took more than a few people by surprise when they noticed that this song -- from Time Love and Tenderness -- was penned by Bolton and Bob Dylan. Admittedly, when approached by Dylan’s camp to write with the icon, Bolton had his doubts that he would not be able to get past the intimidation level of writing with Dylan. But, the success of this gripping performance about a man who can’t escape his lover’s considerable grasp proved that he definitely held his musical ground.

5. Michael Bolton - "How Am I Supposed To Live Without You"

The song that effectively broke Bolton’s career wide open to the masses took a few twists and turns before it became a hit in 1989 to 1990. The singer wrote the pain-drenched ballad with Doug James in 1983 for Air Supply. However, a disagreement with Clive Davis over one of the lyrics made the composition a free agent. Laura Branigan made the song a hit as the follow-up to “Solitare.” The song was even performed by Lisa Hartman Black during her 1982-87 stint on CBS’s Knots Landing, but it truly found its audience when Bolton himself cut it for his Soul Provider disc in 1989.

The title track -- and first of five singles -- of Bolton’s 1989 release, this song was to serve as kind of the prototype for much of Bolton’s success with original material during the 1990s. It balanced power and passion in an effective manner, and brought the influences of Detroit and Memphis to the forefront of Bolton’s music and helped to define his sound.

Bolton shared the spotlight on this touching ballad of longing to be with that special someone that you’re away from with Kenny G, whose saxophone solo helped to give this song another layer of soul. The vocals on this Michael Bolton song were some of his finest, and the video also was notable for the appearance of actress Teri Hatcher -- whom the singer was reportedly dating in real life at the time of the song’s climb in the winter of 1992.

Another dip into the deep song well of Diane Warren didn’t start out exactly like you might think. On the surface, this song might sound like it is about a man hoping for eventual strength to return to him again after a break-up, but Warren told Wesley Hyatt in The Billboard Book of No. 1 Adult Contemporary Hits that the song was initially sparked by her feelings of pain and loss following the passing of her father. Regardless of how you want to interpret it, the song remains one of adult contemporary and pop’s most emotional moments of the late '80s / early '90s.

The most recent top 10 on the Hot 100 for Bolton remains one of his most seductive expressions of love. Written and produced with Robert John “Mutt” Lange, the song exuded passion with each and every line -- about a man realizing that his feelings toward his significant other go far deeper than simple infatuation. These lists are sometimes hard to do for us, but ranking this one at the top is pretty much as clear-cut as it gets.

Permalink Reply by Robin on November 1, 2017 at 11:19am
I love this Gail. Great to see MB getting this kind of recognition!!

Enjoyed reading that Gail and thanks a million for finding and sharing, thanks !!! :)

Permalink Reply by Patience Ogiorumua on November 2, 2017 at 7:47pm
Thanks So much Gail for sharing. This is a safe keep. Much love.

Thought would post this on here too as have put in Bolt of Talent thread but not completely to do with that although sent whilst on his Asian Dream Tour.  Michael tweeted earlier today, at approx 11.00 am his time (Singapore) and believe he was on until, at least, "crack of noon" as he turned it into a Q&A's session.  Firstly, as we kind of know, there will be a South American Tour in March, 2018 as he confirmed one of the countries will be Argentina.  He also said he HOPED to do a Symphony Tour of Australia and said he was working on something "special" for the summer in LA.  He also hinted he is working again with The Lonely Island on a project.

Michael Bolton‏ @mbsingsI know I’ve been absent on Twitter. All the travel and time zones can take a toll! now that I’m back, anything u wanna hear about???
He also, in response to another tweet, where he was asked for pics posted this one saying:  "Me and bamboooo" and pic shows Michael standing on a path which is canopied by bamboo plants. 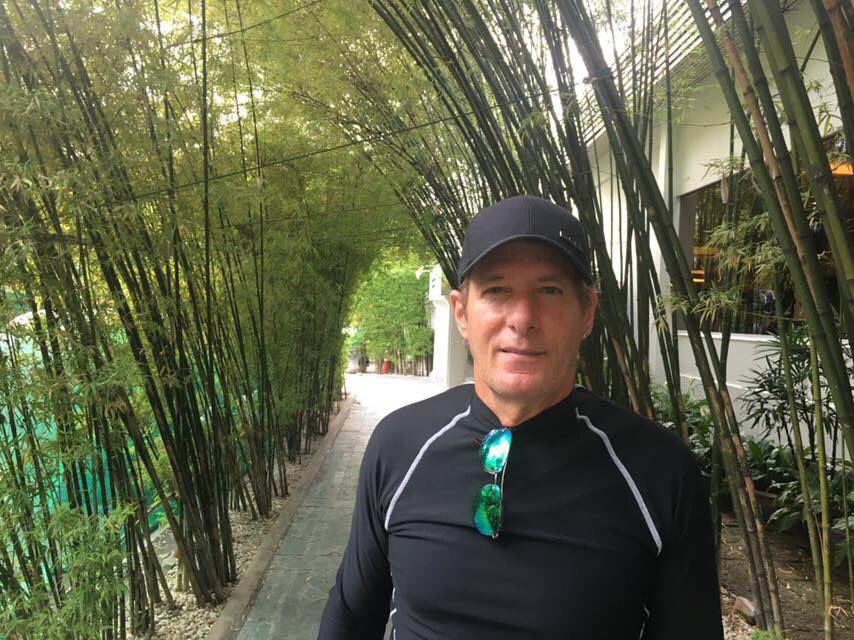 Thought would post this on here as seems as good a place as any.  It is a video from Instagram of a little boy playing the drums.  He is playing along to Michael's "Santa Claus Is Coming To Town" and quite honestly I think he is brilliant.  He looks to be somewhere in the region of 4 to 6.  Obviously it is his parents that have posted vid and I asked their permission to share and especially to share on here and they are apologising because he needs more practice..... more practice, he is awesome already !!!!! lol   Enjoy and if on Instagram, please let his parents know how wonderful he is .....

Have sent to Michael and also to Drew with a warning that he certainly has strong competition !!! LOL

Bandwagon Asia have released a video of Michael giving his evaluation on certain Singaporean singers.  He is sitting talking to someone who you don't see and it switches from Michael having on earphones listening to the music to him talking about it and giving his views.  Believe it has been done during his Asian Dream Tour.  Here is link ....

Michael has posted a #tbt #throwbackThursday video to his Instagram a/c which he took at his home in CT last Spring spanning round part of the garden and swimming pool from patio area.  Here is link ....