Hey Sylvia, thanks for being on the lookout and posting this here, I've sent it to my daughter. Take care. Hugs, sincerely, Sylvie from Canada

Hi folks and here is an article I have found about The Grove event last night and there is also a photo that goes along with and I will place that at end and it is of Michael and Melanie on stage together.......

On the red carpet, before their holiday performances, the stars talked about their fondest holiday memories, their holiday plans, to their upcoming holiday albums…

Colbie Caillat just released a new album, ‘Christmas in the Sand,’ for those of us who don’t experience the typical snowy holiday season.

11th season American Idol winner, Phillip Phillips‘ debut album, ‘The World From This Side of the Moon‘ will be released on November 19, 2012.

After the performances, the crowd witnessed Santa Claus’ arrival at The Grove, the lighting of the 100-ft. Christmas tree, the season’s first “snowfall” and Fireworks Finale!" 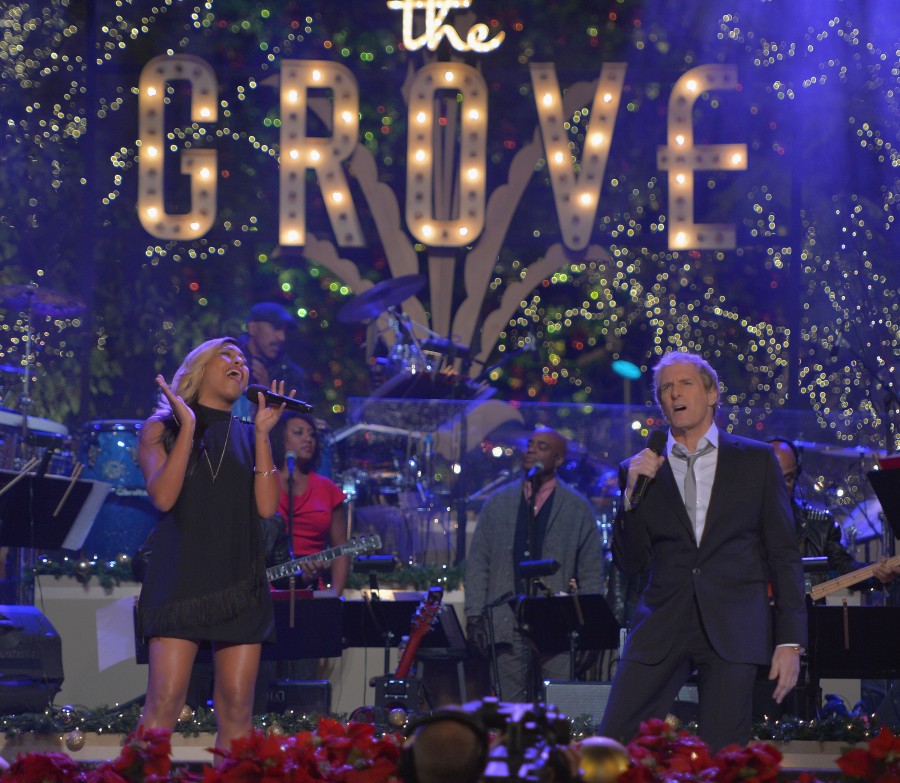 Huge tennis match just going to start here between Federer and Djokovic so don't think you will see much more of me tonight.......thank God, says all of you !!!! LOL.

THANKS for finding all these goodies today Sylvia..Enjoy the tennis!!

Permalink Reply by 0pwxwvug15cbo on November 12, 2012 at 9:50pm
Thanks Sylvia for posting all you did on here today for us, so appeciated I want you to know so get back on here after that tennis match with MORE, MORE, MORE, Lol.......

You deserve a break, enjoy your tennis match.

Hey Sylvia, thanks for the article girl. Wow, a lot of new Xmas music in the air, isn't there? Good stuff to look forward to, thanks again Sylvia. Take care. Hugs, sincerely, Sylvie from Canada

http://www.youtube.com/watch?v=0LmRYzAUtbE  This was just posted on the blog section by another fan..

MB singing Ain't Nothing Like The Real Thing with  Melanie Fiona!!!

Thanks for bringing that link over here Robin MD.....it sounded fantastic and oh, the memories !!! LOL   Would love it if Melanie has recorded it for the CD with MB for they sounded great together....need to wait and see !!!

You are welcome and I agree Sylvia...This is exciting stuff!!!!

Below is a link to another set of pictures (4) of Michael and Melanie Fiona performing at The Grove on 11th November which I hope enjoy !! :)

Permalink Reply by 0pwxwvug15cbo on November 13, 2012 at 11:13pm
Thank you, Sylvia, enjoyed the photos very much. Now, the only thing better would be to watch it live which if I understood Gail correctly, is going to happen.

Yes indeed it is going to be on the telly but I fear again I will have to pray, light candles, or rub Buddha's tummy, in the hope that someone records or we get a link !!!! LOL.   Beginning to feel I live in the land of de je vu !!!!  LOL

Hi folks and just to let you know that Michael sent a tweet to Trevin Hunte saying to him:   "keep going Trevin. mb" and Trevin answered back;  "OMG. Thank you so much !  You are so amazing !!!"  and below is the link to Trevin singing WAMLAW on The Voice and it is some darn rendition of it.....terrific !! :)

Had to share that with you for when I saw MB's tweet I thought that is just so lovely of Michael and so typical to give encouragement where encouragement is due and then when I saw Trevin's reply....do you think he is just a little bit over the moon ??? lol