Someone is recording a new album!!!!!!

Studio time in LA recording the new album. Details to come in the following weeks, but I'm loving it already and I hope you will too!

Was coming to post this very article!!LOL  It does say the CD will come out in early September and there are a great number of other details in this than we have heard before.  Gail

Sorry I got here before you, not trying take your job away from you!

I really wasn't sure if this had been posted in another thread or not, as I don't read every little thing on here.

Hi Joy, thank you so very much for posting this! For the record, the only hints we'd had before were from the article I posted above and a post from Cameron on a blog that Dianna shared with us, in the tour thread if I'm not mistaken. But as Gail said, this is much more than we've had before! I personally think that since he won't say anything about the duets that one might be with Stevie Wonder and if it's 2, it's even better! Again, thank you so much Joy, great article and great news. Take care. Hugs, sincerely, Sylvie from Canada

Received below article which was published yesterday, 6th, and thought interesting enough to put on here as MB does talk about upcoming CD ......enjoy !!! :)

"Over the course of his nearly four-decade run in the music industry, Bolton has made forays into soul-infused balladry ("How Am I Supposed to Live Without You"); a smash cover of the 1960s R&B standard "When a Man Loves a Woman"; hook-heavy arena rock (both as a solo artist and with his short-lived combo Blackjack); and swinging big band (an entire album of Frank Sinatra covers).

Collectively, Bolton's albums have sold more than 53 million copies worldwide, and he has logged nine No. 1 singles stateside.

The 59-year-old tenor's most recent effort, 2011's "Gems: The Duet Collection," features collaborations with a staggering range of artists including country hitmakers Rascal Flatts and "Slumdog Millionaire" and "127 Hours" composer A.R. Rahman. Bolton also recently became an online sensation with the release of comedy trio The Lonely Island's "Jack Sparrow," on which guest vocalist Bolton interrupts the group's seedy nightclub tales with off-topic references to films such as the "Pirates of the Caribbean" franchise, "Forrest Gump" and "Scarface."

Bolton fans in the Lehigh Valley will have a chance to experience his eclectic revue firsthand tonight when he visits the newly minted Sands Bethlehem Event Center. Bolton recently took some time to discuss both in an email interview.

Q. Can you describe the recording process for "Gems"? How did you select the track listing and collaborators? Rascal Flatts, Paula Fernandes and A.R. Rahman, among others, are a pretty diverse group.

A. All of these artists are people who I respect and who have inspired me musically and artistically. The recording process with all of them was very organic and I believe some of the best music I've written and performed in years came out of the recording sessions with each of them. I have had the opportunity to perform with many of them this past year or two as well.

Q. Speaking of collaborations, you've done quite a few with prominent artists in the past decade. If you could record a full album with any one artist, who would it be?

A. I don't think I would ever record a full album with just one other artist. But I am working on a new album of Motown music and will be recording with many artists from that era. I'm really excited about sharing that with fans this year.

Q. More than 30 years into your career, you seem to always be working new influences and styles into your music. What have you been listening to lately?

A. I absolutely love Adele. We are so lucky to have such an incredible voice to hear and that a generation is fortunate enough to experience such an amazing gift for songwriting and performing.

Q. Not to spoil any surprises, but what can fans expect from upcoming shows? Will you be playing any deep cuts/rarities from the 1970s and 1980s?

A. I don't want to give anything away but fans always expect to hear some of the classics. So you'll just have to go to hear what we have in store.

Q. What is your favorite aspect of a live performance?

A. (My favorite aspect is) the fan response. To feel that energy from the crowd. There's nothing like it. Especially internationally where fans are some of the most responsive anywhere.

Q. A lot of younger audiences were first introduced to you via your 2011 collaboration with the Lonely Island, "Jack Sparrow." Do you think that song and accompanying video have helped a new generation discover your discography?

A. Absolutely! I loved working with those guys and we've already started talking about what we can do next. It was such an amazing experience to be part of that and to have people everywhere respond. I never imagined anything like that would happen for me and I couldn't be more grateful."

Thanks for the article Sylvia. I think we'd better brace ourselves for this one because our Michael is tight-lipped as ever on it. i wonder how far along he is in the recording process... Well anyway, thanks Sylvia, take care. Hugs, sincerely, Sylvie from Canada

Thanks for posting this one, great article Sylvia!!

I have said it already but "our boy" has perfected the art of tease and here he comes again......latest tweet posted over to FB along with picture showing a very, very old Detroit..........

"Downtown Detroit back in the day... A new day is coming!!! Stay tuned" 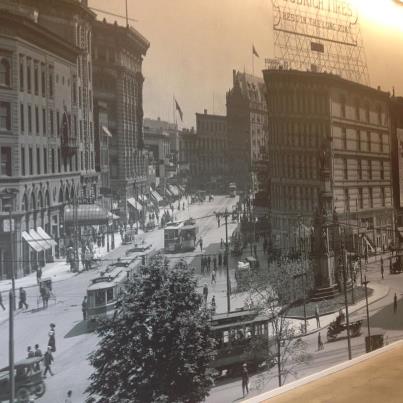 Useless piece of information......full of it, aren't I ??? .......I had an uncle who was the black sheep of the family, went with the show girls and he took himself off to Detroit way back when.....wish to God I had had opportunity to know him.....so anybody out there called Fyfe .....hey, we might just be "kissing cousins" !!! LOL.

Michael is in Detroit just now and working hard and enjoying himself too and thank goodness he had time to relax a little bit by going to a rooftop yoga class............. 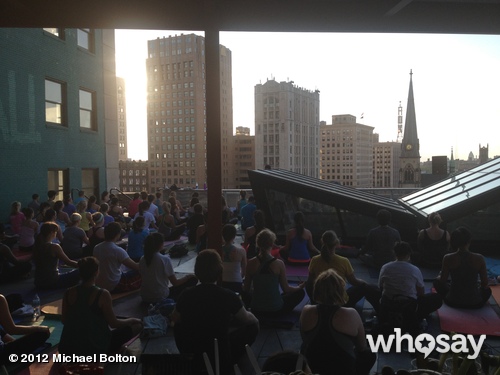 Picture shows back view of people sitting on roof and believe MB is in final row in middle and you are looking toward a Detroit skyline !! :)

I have managed to "kidnap" my laptop for five minutes as Matthew is making me dinner....Chinese curry and the aroma coming out the kitchen - wow - I am going to enjoy !! :)

Surprise, surprise but I believe I may have things wrong about that picture for I now seriously wonder if that is MB in back row for he has just sent another picture but he is dressed in shirt and suit and you can see out onto roof to yoga class but Michael has turned to look at camera with a look of pure shock on his face for he states that they want him to try the downdog........yeah, here come Busa and Parker....down dog , down !!! lol. 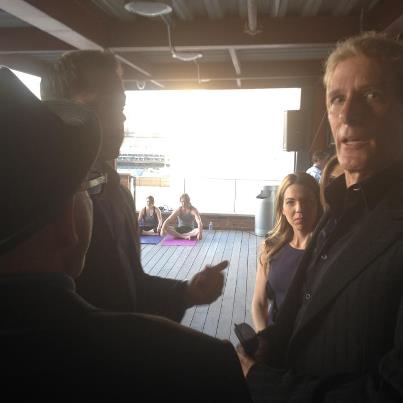 Five minutes for Chinese curry to be ready and European Football Championship just starting.... what more could a girl ask for.....well.....eh....hmmmm......!!! lol.

As shared by Catherine Bradley. The new album confirmed as Motown music.

I am thrilled about all the excitement with a new Mowtown album.. I grew up on Mowtown music and love it!!...Cannot wait to hear who MB has worked with on this one!! Will be a blast I'm sure.MB has been waiting a long time to do this one and I cannot imagine how excited he is!! Between this and the book coming in the fall, we are in for a fun ride the rest of this year and into the next I'm sure!!!!