Great pictures Sylvia!  I see you are hanging on tight!!!LOL

Just gone onto the forum to read some more reviews  .There are all great reviews and from one who unfortunately is missing  them all  it's so nice to be able to read them . So keep them coming folks !!!

What can I say I have just seen your photos and they are fantastic. Were they taken at your M&G ? How did you feel when you finally got to talk to him & touch him . I don't know what I would do - I think I would faint or make a real fool of myself somehow LOL.

HAVE ANOTHER FAB CONCERT TONIGHT IN GLASGOW .I KNOW YOU WILL AND RAISE THE ROOF AS THEY SAY!!

Look forward to reading your  next review.

Love and Best wishes from Italy

Have a great evening, Sylvia!

they are great pictures from Cardiff(before THAT haircut-yours,I mean).you must be Mega excited on your home turf today.Enjoy!Did you post the pictures with the 2 of us somewhere I cannot see? 'cause for the time being there won't be another possibility for us to take a picture together.Well,you never know.The world became small (for some).Anyway,should Susan Boyle be in attendance,say Hi-not particularily from me,just say hi,..but do I have to tell you what you should do?Guess not.Have a great and splendid time.Angelica

Hi Angelica and wonderful to read you on here again and thanks so much for coming in !!! :)   Reason I never said anything and didn't post pictures was because in Cardiff you said you didn't want to be on such an open site as the forum but I will tell our little story of how we met again and I will post pictures of us together and before I post pictures folks will tell you that Kelly Levesque took them for me and you can see in these ones my red and shiny face.  Here are two photo's of us: 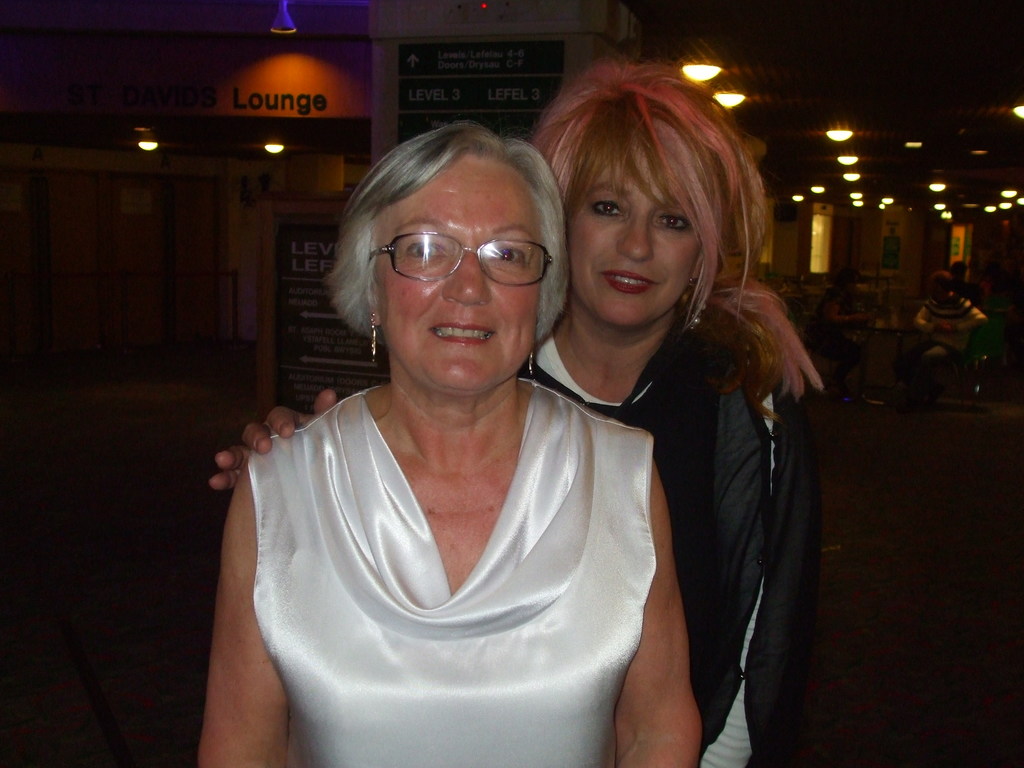 Hope you like pictures Angelica ??? :)   As we have said we met in Cardiff without either knowing we were going there and it happened after I had my M&G with Michael and I was making my way out of the theatre and to do that I had to go past merchandise table and I saw Joe but then I also spotted Kelly who has been at the merchandise table every night advertising her upcoming CD and there were still a few people round table and they slowly left and I went to Kelly and thanked her for a wonderful show and then I found myself looking over at this person that I felt I knew from somewhere and this person was looking back at me and it dawned on both of us at same time who we actually were and of course had a good old chin wag and then left theatre.   In Bristol just before going into theatre I decided I needed the loo (bathroom) and as I was going in who was coming out but Angelica and again we spoke for a little while but it was more difficult as too many people about in and out of door and BTW Angelica doesn't like my hair short because when we had first met which must have been now about coming on for 3 years my hair was sort then so in Cardiff was first time she had seen me with it longer; which she much preferred and hey Angelica I might just grow it again....who knows, not even me for I am far too spontaneous at times  !!! lol  For all the newbies on here Angelica used to pop in and out, when she could get an internet connection, but hasn't been on for about 2 years now but is a long time fan of MB's and we met at a Fan Reception which was held in London in 2011 and I have to say Angelica it was more than lovely to see you again and don't be such a stranger on here for even if only once in a little hope, please pop in and let us know how you are....please!!! :)

GREAT story Sylvia and thanks for sharing!! I LOVE the Bolton Buddy stories we have at one time or another :)

Nice photo's of you two. That's so neat you ran into each other!!

Hi Sylvia,
wow - beautiful photos. Now you Bolton adventure is complete. Photo with him, great places and experiences, great meeting with Kathy Rosario and unforgettable concerts. You will not forget her life. I am so happy for you.
Do you still have a good time and I look forward to your reports.
Greetings from Berlin
Katrin

Hey Sylvia! Michael carries the Jacket that you has liked always so well! And you control Michael firmly!!!! How long have you held on him??? Nice pictures! Congratulation to this recollection!

Permalink Reply by Kathy Tulsa on May 16, 2014 at 11:07pm
Lovely photos, Sylvia, and thank you for sharing them with us :). Looking forward to all of tonight's concert fun review too :). Hugs,