Just asked Jan what her favourite songs are.

So far the top three are

How can I live without You.

Soul of my Soul

She also remembers Kenny G who she saw at Sheffield Arena at the very first concert of Michaels she went to.

Not sure she will see Gabriella as she will be at the meet and greet before Michael comes on stage.

Will she enjoy it I have no doubt she will be over the moon once she gets over the nerves.

Permalink Reply by Julie Hanley on April 22, 2016 at 9:31pm
Hi
Well Michael does How am I supposed to live without you as duet with Sam and is a brilliant version of it! At the other shows, the meet and greets have been after the show, just to warn you, I think you go to meeting place before and get told where' to go after the show, . Maybe different at Shefield I don't know, but that seems to be format. Gabrielle comes on 7-30 to about 8-15, then break and Michael comes on about. 8-45 , playing guitar as he comes on stage!!! Manchester was over about 10-15 with Steel Bars as encore. He does When A Man Loves A women in audience as he has in past.
I am sure it will be rememorable, Manchester was, wish I could be in Shefield to help make more of it for Janet.

Hi again Janet’s husband, my goodness, congratulations on your longevity! We were all comparing notes on this thread a while back: 30 for me and my hubby this year. lol Your comment about changing music usually comes from my eldest daughter. :D Well my dear, you seem to be doing a very good job at pampering your wife, which is very sweet. Best of luck to you all and if Janet is up to it, tell her to feel free to let us know how she enjoyed the show. Take care. Hugs, sincerely, Sylvie Qc Canada :D

Permalink Reply by Usha Ramadhar on April 23, 2016 at 2:51am
You guys are all so sweet! Regards, Usha, Mississauga , Canada

Thanks for the nice words.

I have told janet just now that she has only one more sleep before she gets to meet Michael.

Reminds me of the night before Christmas as a young child.

Will let you know how it goes on Sunday.

Hi again Janet’s husband, I hope we can call you by your name if you keep posting. :D lol I just hope that Janet can sleep in anticipation... :D Our thoughts are with you, so knowwe’ll be hoping for a report, after the dust has settled. Take good care. Hugs, sincerely, Sylvie Qc Canada :D

Oh! Wow! Sir that you 2 have been married 48 years. Sorry about Jan's breathing difficulties.

I'm late. Brian, sorry that Janet has lung cancer. Will be praying for her & PTL, she got to go to the M&G. Seems as if y'all did enjoy the show. God bless you, your son, Janet, Rita, & MB is an awesome gentleman. Alrighty then that you love his music too.

Denise, thanks for your review & I agree. Welcome to the forum.

Not posting a review, yet, for Glasgow last night but thought would come in and share this picture with you and it is of Jason standing on stage in an empty Clyde Auditorium, "Armadillo", with his PURPLE shirt on in tribute to Prince.  He also makes comment, in his post on FB, about all the seats in the theatre being purple (coincidence).  He wore the shirt under his normal stage top and just before he started to play he tugged on the shirt to show the audience.  When we came out of theatre I spotted that one of our bridges over the Clyde, what we Glaswegians call the Squinty Bridge, was lit purple and where we were standing waiting for Bob, Kathy LAFD's husband, to come and pick us up there was a security guy waiting for his lift from his wife and I spoke to him about the bridge and he said, although night before it had been lit purple along with the newest arena on the site, the Hydro, for the Queen's 90th birthday it was kept alight last night for Prince.  Here in UK, all our landmarks have been lit purple for Queen's birthday which was 21st, day Prince died.....one of those strangest of coincidences !!! 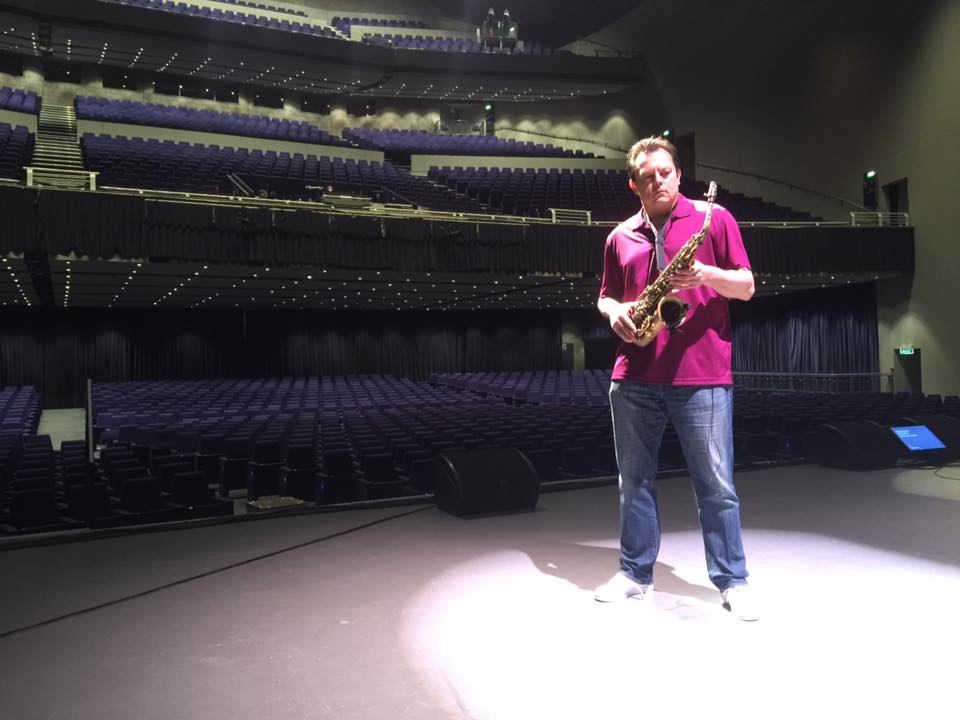 Will be back sometime with a review and some pics......most didn't turn out that good but got one or two good ones.  Hoping someone else might pop on here with review before me.......hint, hint, hint Kathy and I know she got some fantastic pics for little bit I will share with you all and hope Kathy doesn't mind is we had the most FANTASTIC seats in the house.  We knew we were front row but both of us had worked out, looking at seating plan for theatre on internet, that we were off to a side, I thought right and Kathy thought left  BUT  have a guess what......we were both completely wrong.....we were right in the middle of the row staring straight ahead at Michael:  couldn't have picked better seats if we had been able to !!!! lol

Hi Sylvia, I kept reading Kathy’s comments on your reviews and was wondering on which show she was joining you. Very cool about Jason’s pic and the purple seats must have been a Princely intervention... :D  I’ve heard the lights at city hall here in Montreal were lit purple too. Too bad about your pictures but I’m glad to hear you had the perfect seats, so we’ll be expecting the perfect review from you guys! XD Take care Sylvia and thanks for the preview. Hugs, sincerely, Sylvie Qc Canada :D

Great news about the seats, Jeff and I landed front row dead center in Indiana too and more centered than we thought.  Only negative about dead center is picture taking for me.. You get MB eating the microphone alot at center stage or shadows from it on his face.  Otherwise I LOVE Dead Center Front row too. Just as a person that takes loads of pics that is a little bit of a challenge, have to wait till he moves off away from the mic at center stage.. Learned that lesson...But yup, great seats!!