I wanted to start a new thread here to keep any promotional tv or other appearances for Michael new book or CD.  So far this is what I have.  They will also be listed on the main page but I will try to remember to bring them over here.  As always, check your local listings for times and stations but most will be NBC.  Times will vary:

Thursday, January 31st (this is actually at 12:30 a.m. EST so definitely check listings on this one)
-Jimmy Fallon

A little bit out of Access Hollywood Live in a little article on what Michael has said and a picture from 6th September, 2011 when MB appeared on Access.........

Michael Bolton may have sparked rumors that he is still carrying a torch for Nicollette Sheridan, by writing about their lengthy love story in his memoir, “The Soul of It All,” but he’s not sure there will be another chapter.

Asked about the former couple’s connection, which spanned decades, Michael said it was something that is hard to explain in words.

“It’s just something that happens with you and somebody in your life,” he said.

“That relationship was on and off for 17 years. I was five of course, when it started,” he joked

During his visit to Access Hollywood Live on Wednesday, Michael, who just released a new album – “Ain’t No Mountain High Enough: A Tribute To Hitsville U.S.A.” — also cleared up the rumor he once babysat a young Paula Abdul.

“Her older sister went out with my guitarist, so we would go over to the house, and then we’d all be like, ‘Um, should we go out and eat or do something?’ We couldn’t’ leave Paula alone. She was too young,” Michael said (he noted Paula was likely “10ish” at the time).

He did confirm the story that Paula once accidentally stabbed herself in her leg with a pencil, while he was there.

“I still think that was just a ploy to get some ice cream,” Michael said. “She said she sat on a pencil and it went into her leg. I don’t remember taking her to the hospital, to the emergency room, but I do remember [getting] ice cream.”" 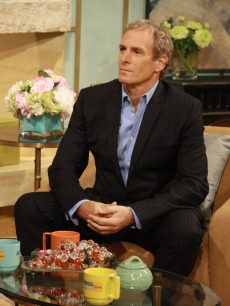 THanks Sylvia..Nice interview on AH.

Just got done watching Hallmark Channel Home and Family while here on my lunch break. MB did a great job, very funny, didn't tell us anything really different but was nice seeing him so relaxed. He had on a blue button down shirt and jeans..Love the haircut too..Kelly did a fantastic job.. The duet was alot of fun to watch. I envy the folks out there in the audience for the show..

Great way to brighten up my day!

Just thought I'd let you all know "The Talk" has been preempted because of the election of the new pope.  Hopefully they'll repeat the show sometime soon.

Hi Sylvia! Thanks for the article! This photo is from today? ... because it looks great ... personally shorter hair fits you best ... always seemed younger but it seems less! thank you! I could not see the programs ... for my area ... kisses, Mar

No Mar, picture is from September, 2011 when Michael appeared on Hollywood Access but they put that picture out today.

Thanks for this article,could you please explain in a few words, I translate some songs are ambiguous but for me, I understood the very passage with Paula Abul, when he was baby sister, and the rest less clear thank you very much to you

This is a translation of the whole artice Katia and I hope you can understand a little more....if not let me know !! :)

thanks a lot Sylvia for the translate

Here is a link into the Hollywood Access Live Show from today and Francoise found link......thanks Francoise !!! :)

Thanks a bunch Sylvia!!