Place to post anything and everything Michael does throughout year for, his own beloved, Michael Bolton Charities Incorporated and all other charitable events and work he undertakes throughout 2018. 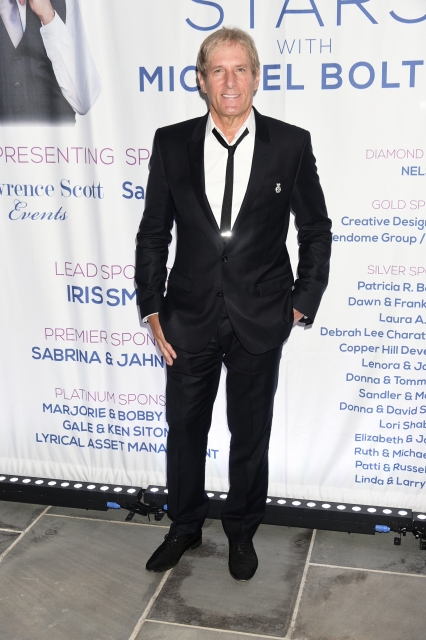 The Michael Bolton Charities Incorporated have announced date their annual fundraiser will take place in 2018 and it is on 18th August at 6.00 pm and will, once again, be held in private residence in the Hamptons, New York.

Just for information Michael will be performing at the American Friends of the Hebrew University celebrating an Evening of Ancient Jerusalem at The Breakers, Palm Beach, Florida on 13th January as part of the 2018 Palm Beach Gala.  Here is link which gives details of cost for different categories for those wishing to participate and attend private dinner or attend dinner at which Michael is performing.

Michael has sent below tweet with pic of himself on a Gulf Stream jet heading to, I believe (lol), Palm Beach, Florida where he has an event tomorrow night on behalf of the American Friends of the Hebrew University's Palm Beach Gala Dinner at The Breakers, Palm Beach.

Any guesses where I’m headed next?? #travel #journey #destination https://www.instagram.com/p/Bd143t9ltcR/ 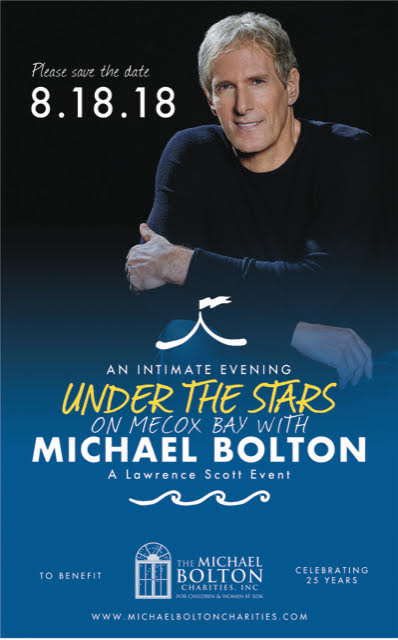 Thanks a million for posting this poster on here Gail for haven't seen, thanks !!! :)

Just ran across this on the MBC event page of the MBC website. If I were not having surgery a few days prior I would love to attend this event in CT. I love going up there...Charity concert and reception!!  Check it out!! 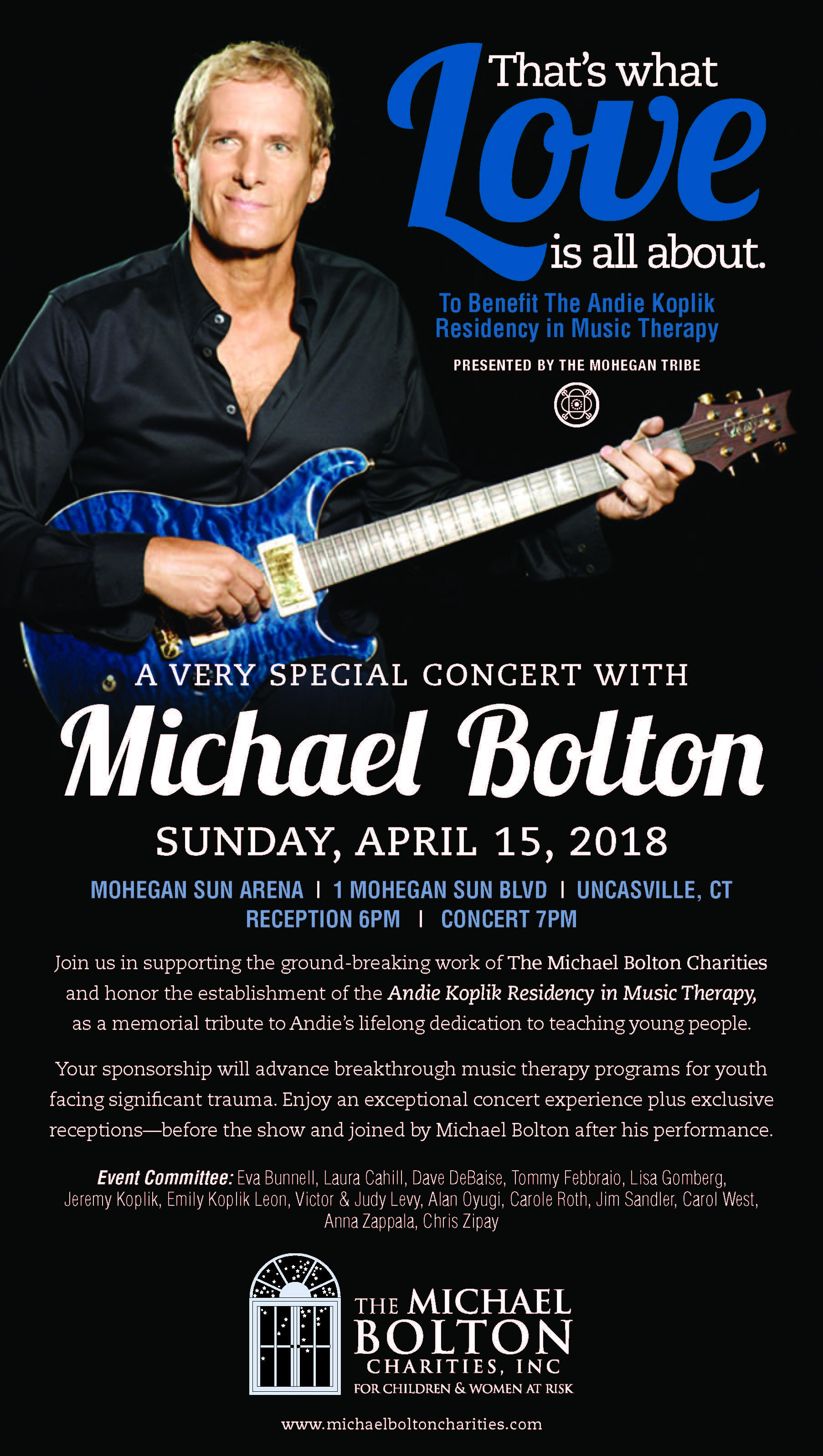 MBC have posted below comment with obituary to Dr. David G Carter who was Board President of MBC and who passed on 17th March,

"It is with great sadness that we announce our beloved Board President, Dr. David G. Carter, has passed away. Dr. Carter's leadership, dedication and commitment to The Michael Bolton Charities has left an indelible mark on our organization. He will remain in our hearts forever....RIP Dr. Carter."

"Dr. David G. Carter, the retired chancellor of the Connecticut State University System (CSUS) died after a valiant decades-long fight against an array of illnesses on March 17, 2018 in Mesa, AZ. A highly accomplished and widely respected educator and administrator, he was 75 and was a longtime resident of Mansfield and New Haven, CT. He was born in Dayton, Ohio, the son of Richard and Esther Carter. During his five years as Chancellor, Dr. Carter led the four-university system through its greatest expansion in academic, program and campus development. In his final year as chancellor in 2011, CSUS reached an all-time high of 36,629 students at its universities. Dr. Carter became the first African-American to lead a four-year institution of higher education in New England when he was selected to serve as President of Eastern Connecticut State University (ECSU) in 1988. During his 18-year tenure leading ECSU's campus, he boldly transformed a small campus with a limited number of degree offerings into an advanced and diverse educational haven - and meticulously realized his vision, building Eastern's reputation as "Connecticut's Public Liberal Arts University." The physical campus at ECSU was also strikingly remade under his leadership. With high-tech academic buildings including the Science Center, J. Eugene Smith Library, and Child Family Development Resource Center; Gelsi-Young Hall, a modern Public Safety Building and residence halls, the university campus took on an atmosphere of a traditional New England Village while enhancing the overall student experience. Dr. Carter was appointed chancellor of CSUS in February 2006. His experience as a public college president who worked closely and effectively with state government and the business community enabled him to lead an effort that resulted in the State providing funding for a $950 million commitment to update and upgrade the four campuses in the CSUS System. It was the most comprehensive expansion in the shared history of the universities, and a transformation that extended years after he retired and continues to benefit current students. Chancellor Carter is survived by his wife, Dr. Sandra C. Holley; former wife, Lena Smith Carter, Middletown, CT; two brothers, William (Iula) of Dayton, OH, and Joseph of Las Vegas, NV; four children: Ehrika Carter Gladden (Blayne) of San Jose, CA; Jessica F. Carter of Middletown, CT; Dr. David George Carter, Jr. (Jeni) of Toledo, OH; David M. Holley, of San Francisco, CA; and two beloved grandchildren, Hutchinson Lawrence and Ellis Catherine. He was predeceased by two brothers, James of Silver Springs, MD and Samuel of Dayton, OH. Friends and colleagues may send contributions in memory of Dr. Carter to The Michael Bolton Charities, Inc. (for Children and Women at Risk), P.O. Box 936, Branford, CT 06405, www.michaelboltoncharities.com; Fidelco Guide Dog Foundation, 103 Vision Way, Bloomfield, CT 06002, www.fidelco.org; or the Shyaam Bachman Memorial Scholarship Fund, c/o Hartford Foundation for Public Giving, 10 Columbus Blvd., 8th Floor, Hartford, CT 06106, www.hfpg.org/shyaam. A memorial celebration of the life of Dr. Carter will be held June 9, 2018 at 11:00 a.m. at The First Cathedral, 1151 Blue Hills Avenue, Bloomfield, CT. "

Michael will perform at the Dolby Theatre, Hollywood, LA, on 26th April when Mark Canton and Dr. Daniel J Wallace become recipients of The Jane Wyman Humanitarian Award at the Champions For A Cure Gala of The Arthritis Foundation.

"The veteran producer will receive the Jane Wyman Humanitarian Award alongside Dr. Daniel J. Wallace on April 26.
The Arthritis Foundation has its mind set on honoring producer Mark Canton and Dr. Daniel J. Wallace. The duo have been tapped to receive Jane Wyman Humanitarian Awards at “Spend an Evening in a New York State of Mind," the organization's upcoming Champions for a Cure Gala on April 26 at the Dolby Theatre in Hollywood, which will also feature a special performance by Grammy winning artist Michael Bolton.
In a statement about his award, veteran executive-turned-producer Canton singled out 2014's Cake, the Jennifer Aniston-starrer he produced alongside Courtney Solomon, because of its storyline involving chronic illness. “Making the film about a person in chronic pain was so revealing about the extreme challenges that people with arthritis face every day,” he said. “When I spoke with these children who don’t know, from one day to the next, if they will even be able to attend school, it strengthened my resolve to help them. I am so proud to accept this award and support the Arthritis Foundation.”
Canton, who has held top posts at Warner Bros. and Columbia TriStar before seguing to the Canton Company and, now, Cinelou Films (which he and Solomon co-chair), is known for such efforts as the 300 franchise, Letters to Juliet, Mr. Church, Den of Thieves and the TV series Power.
Wallace is board-certified in internal medicine and rheumatology. His academic endeavors include having served as chief of rheumatology at Cedars-Sinai Medical Center, Century Hospital and City of Hope. He is currently clinical professor of medicine at the David Geffen School of Medicine at UCLA. “My practice involves seeing people every day and helping them to live the best life possible,” said Wallace. “I’ve been involved with the Arthritis Foundation for many years and know how much they are doing to make a difference to help my patients.”
“The Arthritis Foundation is changing lives in every community,” said the organization's Los Angeles executive director Phillip Hain. “We have to remind people that more than 54.4 million Americans have a doctor-diagnosed form of arthritis, of which 2.4 million live in California, and that over 300,000 children under the age of 16 have some form of juvenile arthritis. The economic burden of $304 billion per year, made up of direct medical expenses and lost wages, affects us all.”"

Super interview Jimmy Koplik has given on Michael and in particular about the fundraiser at the Mohegan Sun for MBC's Andie Koplik Residency in Music Therapy, a memorial tribute to Andie for her dedication to teaching young people, which raised over $100,000.  Sorry cannot extract the interview from the other items in the link but not too difficult to find and where Jimmy talks about Michael is at beginning of his interview.

New poster the MBC has put out for annual fundraiser on 18th August along with link giving details on cost of and how to buy tickets .... 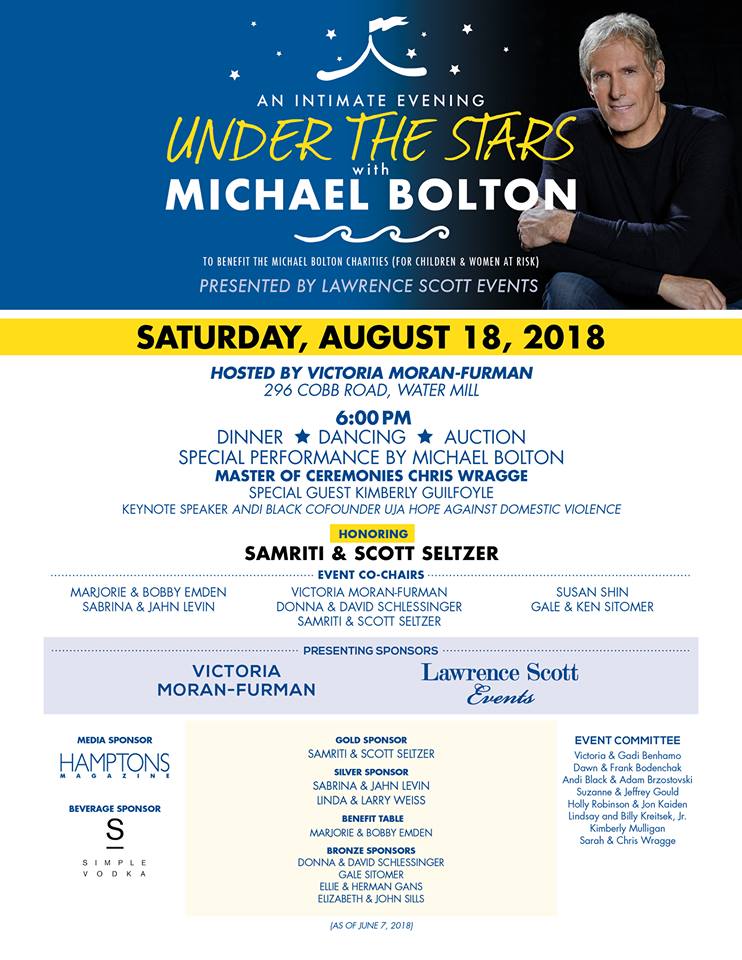