Michael Bolton Back To Tour UK?

I went to see Michael Bolton in concert for the first time in May 2014 and travelled from Liverpool to Cardiff for the concert. It was the best time of my life! I was front row and got to meet him afterwards! I was so so nervous to meet him (and I am never nervous) haha.
Michael is a true legend and has plenty more to give! He is unstoppable and all and every song he has sang or written is just amazing! I was trying to think of one that isn't my favourite but in all true honesty there is none at all! I love every song! True talent! And the best time of my life has been that one evening!
I would love to know when the next plan for another UK tour would be!

Thanks a million for that picture Corinne and I remember you for I was there too.   I kicked off the tour in Cardiff and followed on with another 5 concerts.  Hopefully we will see Michael back in the UK next year.....wouldn't it be lovely and even if he would just come over and do a couple of concerts, in fact,  one would even do.....LOL   Keep watching these pages Corinne for tour dates for 2015 are starting to come out but at the moment they are for the beginning of the year and shows in the States.   Gail always posts new dates in the MB Dates Added thread which is in this section you have come in on to put your post and also she places them in the Tour section on the main page.   Just keep fingers crossed and eyes on the look out !!! lol

Here is picture I got taken with MB in Cardiff ..... 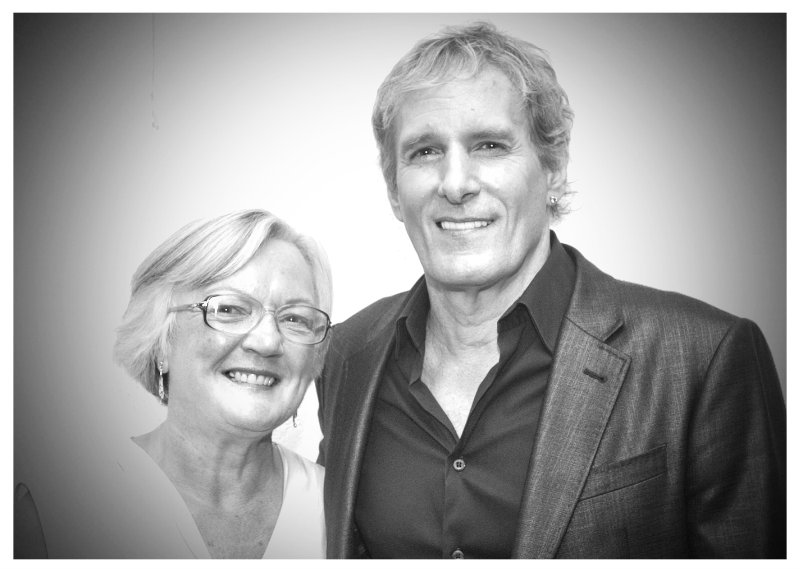 I have zoomed it in and changed to black and white so that my wee red face doesn't seem quite as bad because, oh my goodness, it wasn't half red that night after seat dancing and then stage dancing all the time he was on stage and I forgot to take any powder with me to try and camouflage it as well...I felt an absolute mess that night and rightly so because I was !!! LOL    Different plans being worked on for next time, that is for sure !!!

Lovely picture with Michael! I was going to change mine because I felt a mess that night too! Like you said different plans made! But all of that doesn't really matter because got to meet my idol!
I have listened to him since forever! I am 22 years old now and though out being younger my dad used to play his music and I think that's where I got my love for Michael's music! But i was so so nervous meeting him! But it is a huge honour that I did! Dreams come true!

Thankyou for responding :) I will definitely watch to see. But doesn't Michael usually come back once every couple years?

Just at least once more to see him in concert and I will be so happy!

How lucky are you for going another 5 times! I am super jealous!

Hopefully see you at another one of his concerts!

In actual fact Corinne the tour before last had been in 2010 although he did make one appearance at a charity event which included a golf tournament and was held in London and I think it was in 2012 but it wasn't a ticket event more sponsorship tables.  In between he had come over here for promotional work a few times with CD's coming out and his book but no actual concerts and that was how I went daft with the 6 because I had been saving up for about 3 years and my Michael Fund is well on the go again ....LOL

Hopefully we will get chance to meet up somewhere at sometime and in the meantime, we can keep on meeting in here !!! lol

I'm very happy for you! And the picture is beautiful!

I think everyone who visited in 2014 a concert, now waiting eagerly for a new concert!

Let's cross the fingers that Michael makes us all happy again!