Hi Gail, that's pretty cool for Scott! I hope it helps him with his album sales too. :D Thanks for letting us know Gail, take care. Hugs, sincerely, Sylvie QC Canada

Thanks Gail. Scott is a great guy and a talented one as well.  He was so much fun when he was with MB's band.. .He's made a great career being in the bands on these shows.  Way to go Scott!!

Unfortunately, I do not know Scott Majo! This was before I hooked after Michael Musik! Maybe somebody finds a video with Scott Majo on Michael concert? I would be glad!

Petra this is a video that Scott has on his channel on YouTube and it shows a few pictures of Michael and himself on stage as well as extracts of him playing.    Will see if I can dig up anything else later...okay ???:)   Hope you enjoy !!! :)    A BTW:   I have always thought Scott looked terribly like Barry Gibb and more so with some of the shots of himself he has used in this video.....anybody else see it ????

Do you have seen Sylvia? In a picture Michael carries black leather trousers!!! WOWWWWWWWWW!!!

Many thanks for the video!

AH the black leather pants, I remember those concert days!!LOL We all got to know Scott back then and he's super nice and a wonderful entertainer..

Sent this to Petra, as well as one of the pictures, but thought might as well put on here too so that we can all enjoy those leather trousers/pants again !!!!!!!!!!!! LOL

Sylvia you makes me dumbfounded!! Over again WOWWW! And yet short hair and I am happy with this sight! Many, many, many thanks Sylvia! Wonderful!! And a very good song!!

Hey Sylvia, This is one of my All time favs....I remember seeing this performance on a CMT Award show....I Love that song:)!

Thought would bring over here post put out on FB, to the public, from Cameron on her last night, which was last night, with the band and she has also shared photos and I know and understand many have seen it on FB but just sharing here for those who are not on FB.

"After nearly 5 years with Michael Bolton, I performed my last show last night. Everyone surprised me with a cake and cider before the show, MB made a special announcement and thanked me during the show, and the band presented me with these beautiful flowers after my solo. I felt so loved- a big thanks to all involved! Onto the next chapter!" 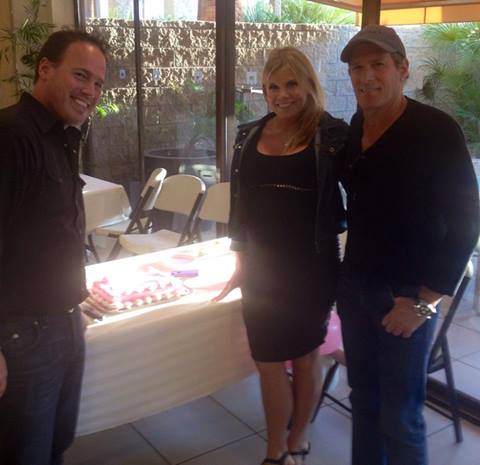 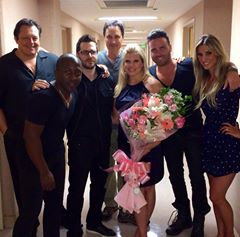 For Sylvie first picture shows Jeff, Cameron's husband, standing at left side of table which contains the cake she was given and Cameron is standing on other side of cake and then Michael is standing on far right beside Cameron and all are smiling broadly and it is a beautiful picture and Cameron certainly does have a "bump".  Second picture is of Cameron standing with all the band members holding her huge bouquet which has a large pink bow at foot with something hanging from it and not too sure if it is a little pink dress or not but would say it looks like it and of course as Cameron has said she is expecting a little girl it would not be too strange if it were.....need to do some zooming !!!! LOL

And for Cameron all luck and a lot of patience if the child is born!!!