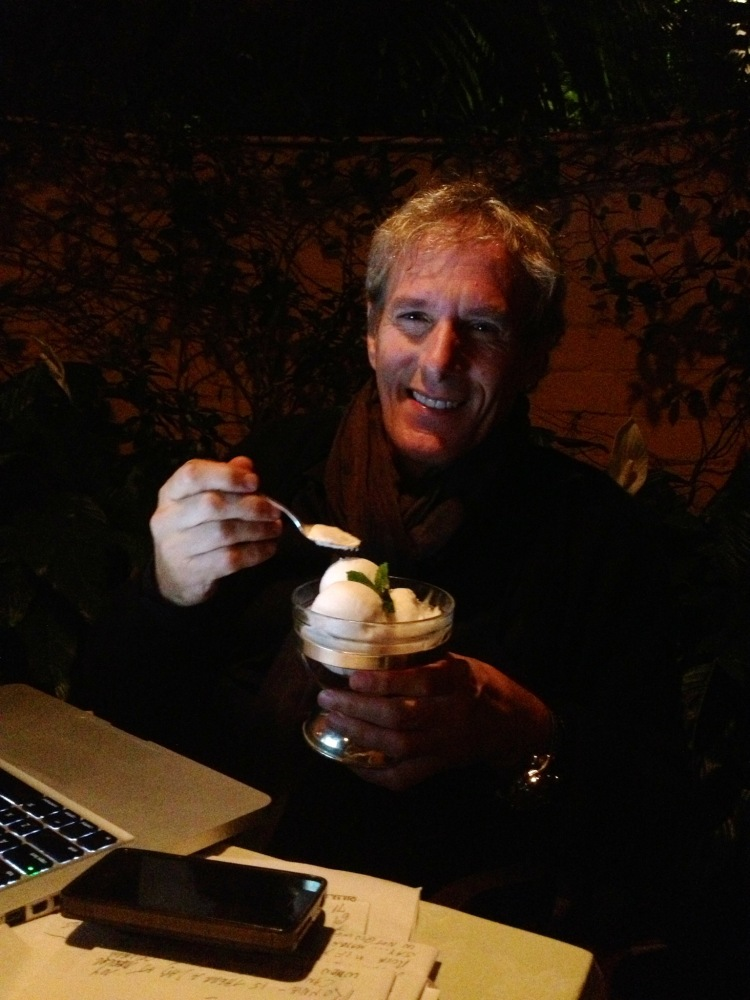 Thought for a little bit of a laugh today and to kick off this thread would bring this over to let you all see because Michael has retweeted the tweet so obviously he wants to share it with all his Twitters so let's share it on here too and maybe somebody that actually knows this picture can come in and tell us all about it !!! LOL

For Sylvie and Robin CA it is a picture that definitely looks as though it is on an outside wall of a building (I can't really work it out) and tweeter says it is at her school where it hangs in Stockholm and it is one of the "older" pictures of MB which was used for one his singles, can't remember which one, would have to check but I can tell you it is favoured by Nicolette....she has it as her avatar and it is a beautiful picture and have always loved it........and the picture also has round it various cover pictures from CD's and it looks as though one holds the key to the year for it is of the "Greatest Hits 1985 - 1995" whilst the others are before that and there is also colourful lettering along bottom written on top of a line of CD's "40 million worldwide" and it also looks as though it has plenty of security surrounding it and going out of shot you can see in other sections of the wall other musical paraphanelia because you can make out a picture of a special sales disc which has been made to someone.....it looks rather ornate and rather beautiful for a school....whether a music school or not that isn't said but rather unique for sure and glad she shared it as well as, in turn, Ron Pope sharing it with Michael who has now shared it with us and I hope you all enjoy it !! :) 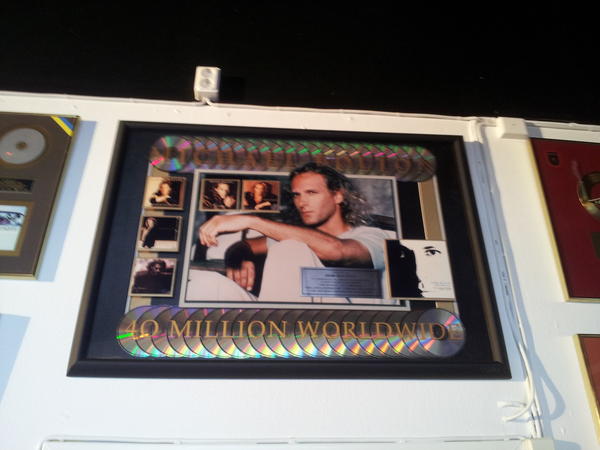 To just add that it is intriguing me so much I think I will go on the World Google Map and search out schools in Stockholm.......if I find out anything I will let you know !!!!! LOL.
Sylvia.   Your wee Scottish friend.
27

Who has this hanging at there school? It's pretty Awesome, I always did Love that pix of MB! You sure have been busy! Whew:)!

But this is really nice!

No one in particular Mary and not someone on the forum, just a girl in Stockholm who tweeted to Ron Pope and he in turn sent it to MB and as I say I will try to find out a little more about but doubt if I will be able to !! :)

Decided to put this link on here as well as on the 2012 Tour thread and it is a link I have been sent by Walter A. Foreman, the interviewer on Insideout Radio in Seoul, who interviewed Michael prior to his arriving in Busan, South Korea for the start of his Asian Tour and whilst MB talks about that tour and his shows he also talks generally about other things hence my reason for bringing link over to here as it is a little bit of miscellany !!! lol    If you go to 8.22 in the show that is where the section begins of Michael's interview....enjoy !!! :)

Believe this is definitely a piece of news that belongs on here and should be shared with you all for it is an article that appears today in Hispanic Business.com and it is with regard to a charitable event which will be taking place on 8th November and at which Michael will be the musical guest

The Joe Torre Safe At Home Foundation today announced the Foundation will celebrate its tenth anniversary at its annual gala on Thursday, November 8 in New York City.  All proceeds will benefit the Joe Torre Safe At Home Foundation and its goal of maintaining and expanding its comprehensive, in-school program, Margaret's Place.
Talk show host Katie Couric will serve as Master of Ceremonies of the evening and Grammy Award-winning singer Michael Bolton will be the musical guest. The evening will honor Bob Costas, legendary broadcaster and long-time supporter of the Safe At Home Foundation.
Celebrities slated to attend the annual gala include baseball legends Yogi Berra, Bob Gibson, Don Mattingly, Willie Randolph and Bernie Williams, broadcasters John Sterling, Lesley Visser, Tim McCarver, NHL's Lou Lamoriello and Ken Daneyko, and actors Stanley Tucci and Billy Crystal, among others.
At the event, the Safe At Home Foundation will introduce its inaugural Hall of Fame, an esteemed network of enduring and significant partners from the last decade.  Inductees include BGC Partners Executive Managing Director, North America and Global Head of FX Products Daniel LaVecchia, Find Your FaceMate Founder Christina Bloom, Kate and Bob Devlin, Goodman Media International President and CEO Tom Goodman, CohnReznick LLP Co-CEO Thomas Marino, Flemington Car and Truck Country Chairman Steve Kalafer, Pfizer CFO Frank D'Amelio, Samsung Electronics America President Timothy Baxter, The Starr Foundation Director Howard Smith, TBWA\Chiat\Day and Verizon VP Of Corporate Communications Torod Neptune.
In May 2002, the Joe Torre Safe At Home Foundation was established in response to the impact that domestic violence had on Joe Torre and his family. Its mission is to educate to end the cycle of domestic violence and save lives. The Foundation's programming initiative, Margaret's Place, named in honor of Joe's mother, provides a "safe-room" in schools where students can speak to a master's level counselor about the traumas occurring in their lives.  Margaret's Place offers students the opportunity to explore issues of violence in a stable, non-threatening environment, while helping them to understand that they are not alone or to blame. There are currently twelve Margaret's Place sites in both the New York City metropolitan area and Los Angeles.
"When Ali and I founded Safe At Home, we decided to focus on education as a way to end the cycle of domestic violence. If children understand that the way to treat people is the way that they, themselves, want to be treated - that violence, control and verbal abuse is wrong - we can change things," said Torre. "In the past ten years, we have seen positive results. I hope that others will feel as motivated as we do to continue to make sure that every child feels safe at home."
The tenth anniversary gala is a chance to get involved and to support the tireless efforts of the Foundation to keep children safe. Tables start at $25,000, and limited individual tickets cost $2,500. Furthermore, a unique keepsake showcasing friends and accomplishments over time, the 10(th) Anniversary Commemorative Yearbook provides many special advertising opportunities for corporate partners in celebration of this milestone year."

Hi Sylvia, well random articles are growing like mushrooms, aren't they? I remember Michael had done an interview with Joe Torre on the Today show back in '04 if I'm not mistaken, while he was promoting the "Terror at home" DVD. That was a terrific documentary and had a beautiful song of Michael's in it. Thanks for bringing it over here Sylvia. Michael's schedule never gets any lighter... Take care sweetie. Hugs, sincerely, Sylvie from Canada

Wasn't there a lady named Jane that interviewed Joe Tory? I remember that well & MB was on the same show. Wow! I think it's awesome about Joe's safe place. So many celebrities are coming up with these awesome ideas to make it safe from abusers. It just makes me be thankful for what I have. I've had the verbal abuse from folks but PTL, no actualy physical abuse but none of it is good. Thanks for all articles out here girls & descriptions.

Hi Robin CA and you have landed in 2012.....2013 is a few pages further on but hope you enjoy all the reading in between and although this thread has quite a lot of pictures in it there is plenty of other stuff too and glad you have eventually joined us and hope you will enjoy looking through everything.

Found this "fun" little video and thought some might like to see and it was shot in Brandon's Way Studio on 16th September, 2009, and Michael enters the studio at 0.50 on the tape......please don't blink or you might just miss him for I believe it is only about a 10 second appearance but I promise you, you do see Michael !!!!! LOL. 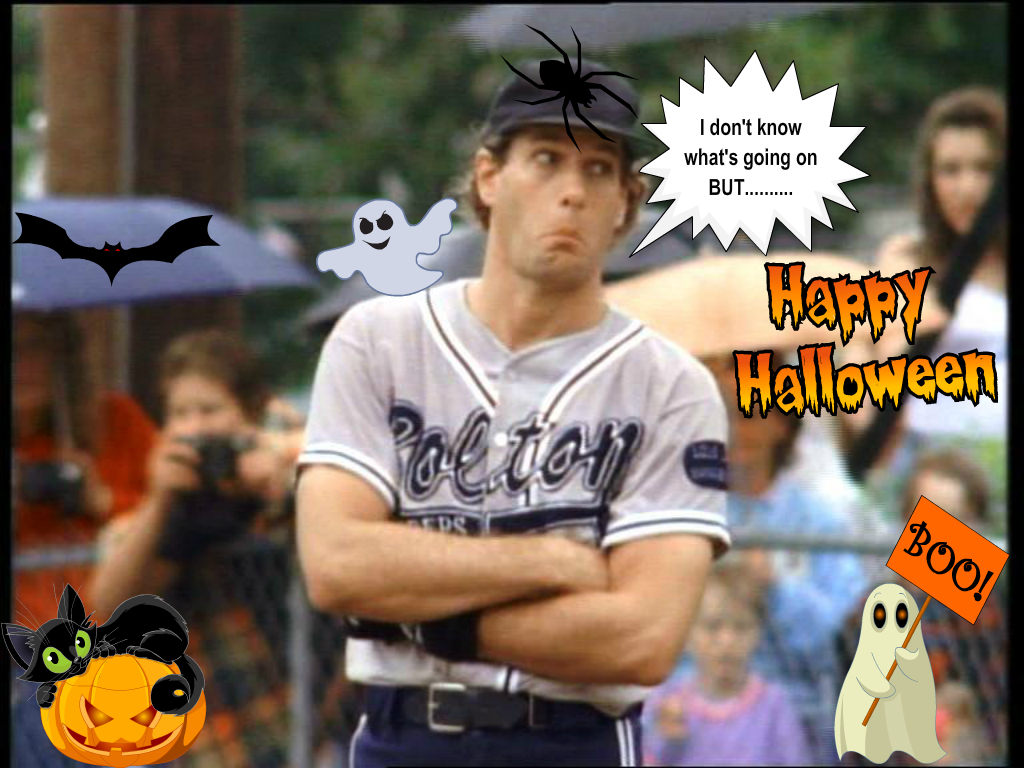 Sylvie and Robin CA just an old picture of MB in his softball uniform taken from a video where he has, to say the least, a questioning look on his face and I have just surrounded it by Halloween dodahs such as pumpkins, spiders, bats and ghosts and have MB saying; "I don't know what's going on BUT..." and then a Happy Halloween sign below.

Thanks for sharing and the description Sylvia, take care girl and happy Halloween to you too! Hugs, sincerely, Sylvie from Canada

Happy Halloween to you and all.