I got this info yesterday but we had a terrible storm with a tornado come through and I've been without electricity and wasn't able to post...so sorry but wanted to let you know Michael took part in this event today:

Permalink Reply by Shannon Chambers on June 27, 2012 at 3:20am
Michael, thank you, thank you, thank you!!! All the work you do for woman and children that are at risk! It means so much to me! Being a victim of domestic violence as well as a survivor myself! This work that you do I hold so very close to my heart! Thank you so much for everything! Continue the great work! You are my #1 hero Michael! Thank you so much!!! Xx

Michael Bolton Comes to the Capitol

Bolton attended a news conference with with Sen. Patty Murray, D-Wash., as part of a group of people affected by the Violence Against Women Act. Bolton heads a charity working against domestic violence and child abuse and represents the National Coalition Against Domestic Violence at events.

"I am surrounded by women," Bolton said. "They basically own me."

Bolton added a touch of celebrity to the event, at which Murray said she would oppose any version of a bill reauthorizing anti-domestic violence programs that excludes provisions only in the Senate version of the bill.

Murray's stance deepens the impasse between the two chambers.

Murray said any compromise version of VAWA that lacks Senate-passed provisions expanding domestic violence protections to Native Americans, and gay and transgendered people would be "unacceptable." 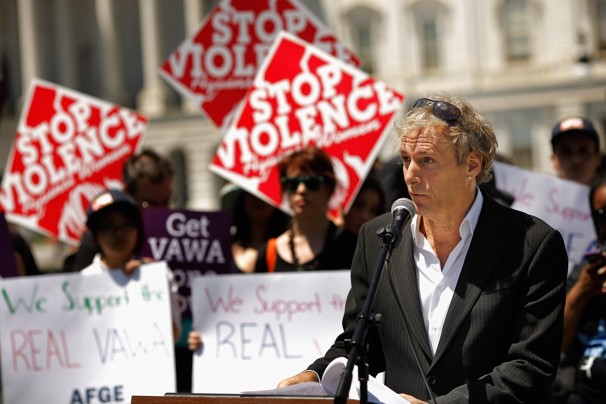 By The Reliable Source

An occasional look at the big names who grace our nation’s capital for a cause. Tuesday’s crusader:Michael Bolton

Venue: The lawn outside the U.S. Capitol.

Cause: The Violence Against Women Act (VAWA), which strengthens legal protections for victims of domestic abuse.

What he wants: For Congress to pass the bill.

How he looked: Black pinstripe suit, but those shoulder-length locks from the “Said I Loved You But I Lied” video are long gone — keeps it shaggy but short these days.

How he sounded: Stern and serious. “I’m here to talk about men, the 31 men in the Senate who oppose VAWA,” said Bolton during a four-minute speech. “Why are they not willing to help immigrant, native women, and GLBT victims of domestic violence and sexual assault?”

Soundbite: “On that note, I would just like to say, [singing] when a maaaaaan loves a woman, they do the right thing.”

Permalink Reply by Shannon Chambers on June 27, 2012 at 4:40am
Gail, thank you so much for posting this! The link for your second post is not working though!! Xx

Not sure which link you mean...I didn't put a link..just copied the stories...you don't see them?

Permalink Reply by Shannon Chambers on June 27, 2012 at 6:35am
No that's what I meant sorry! On the 'Reliable Source' I clicked on it and it would not work, but is working now! Thank's Gail!!! Xx

Thanks for sharing this Gail..I am glad you are ok!!!

Wow, Thanks Michael for your tireless efforts on behalf of victims of domestic violence and fighting for the VAWA!!

WAY TO GO Michael!!!! Will those 31 men in the Senate do us a favor and just RESIGN!!!! This country has got to move FORWARD. Thank you Michael for speaking for and giving a voice to the voiceless. That is what a REAL man does....hint hint Senate!!!

http://www.michaelbolton.com/profiles/blogs/singer-michael-bolton-r...  Here are some more links to stories and pictures from the event.  Gail

Permalink Reply by Barbara R on June 27, 2012 at 6:28am
I cannot believe that legislation continues to exist in the USA which blatantly supports such inequality! All people should have the right to be protected from domestic violence. This is the 21st century isn't it? As a recent new follower of the website and not someone familiar with what MB has been doing all these years in this regard (mostly because I don't live in the USA), I take my hat off to Michael for his ongoing efforts in trying to help these people. I don't know how Michael decided to become involved in such a cause in the first instance but it is quite apparent that through his efforts and status, he is making a huge difference to many peoples' lives. It is so good to see that someone as talented and gifted as MB is also humble enough to help reduce, if not eliminate, domestic violence in the USA. The man who wrote "Soul Provider" is a real soul provider for victims of domestic violence and possesses a kind soul. There is hope after all.

Glad you are safe Gail...boy what a difference a few days make!!!