MIchael will be playing from January 17 - 20 in the Pro Am.  It will be shown on the Golf Channel each of those days starting at 3 p.m. EST.  This event is the old Bob Hope event.

Thanks for correction Gail !! :)    I failed to notice that 16th is a practice day on the three courses for those taking part in the Bob Hope Legacy Competition for full schedule wasn't up when I had looked at only starting dates and times of both events..

Thanks for the info Gail on the tv schedule and Sylvia thanks for this new thread :) This will be a fun break for Michael while he is on vacation. Good luck Michael!!! Cheers to another hole in one!!! 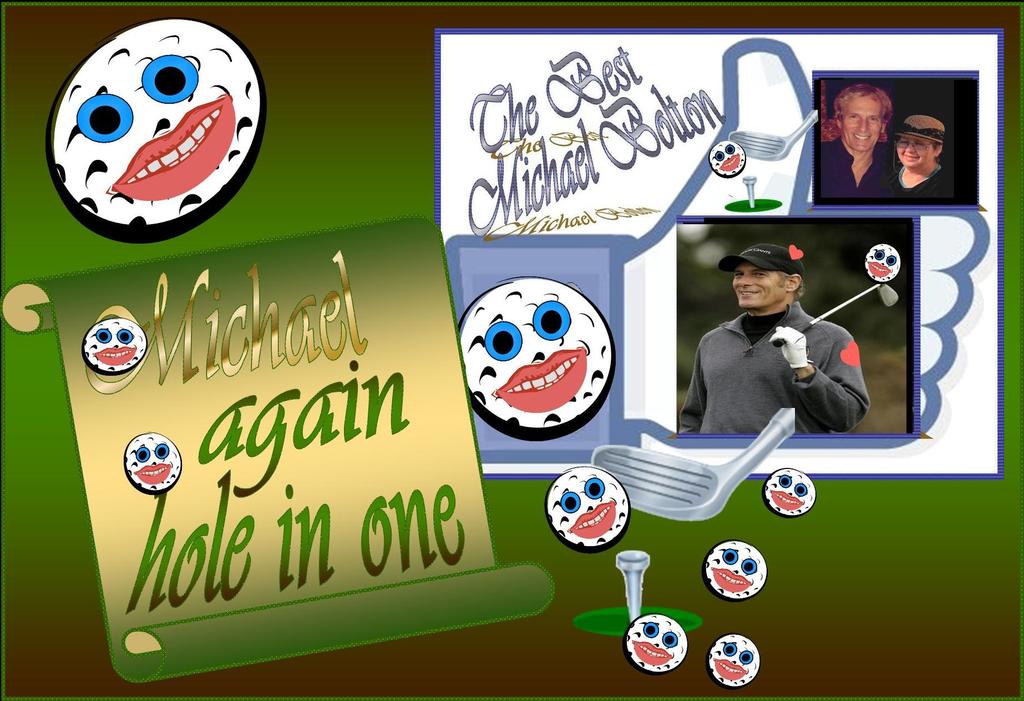 Oh Marie that is beautiful and I love that smiley face on his golf club !!!! lol.

Found this article to do with Tony Bennett kicking off the tournament at the La Quinta Country Club, La Quinta, by giving a performance on the Wednesday night to those invited to attend.   His attendance is mentioned in the official pages for Humana Challenge but thought this little article interesting enough to put on here !!

Tony Bennett to kick off Humana Challenge in La Quinta

The invitation-only event will be held at the Empire Polo Grounds in Indio and is open to participants in the Couples and Bob Hope pro-ams, according to tournament organizers.

“Mr. Bennett is a legendary performer whose great body of work has stood the test of time,” Humana Challenge Executive Director and CEO Bob Marra said. “We are proud to offer this very special event to thank our pro-am participants and get everyone excited for the first round of the tournament the next day.”

Pros will play on both courses later in the week.

To reserve a spot in the pro-ams, call Wendy Morton in the Humana Challenge tournament office at 760-346-8302 or email wmorton(at)humanachallenge.com.

For information and tickets, go to www.humanachallenge.com

Thanks for the article Sylvia!! I hope MB is blessed with a long career as Tony Bennet has enjoyed!!!

Hey Sylvia, thanks for the article, that was interesting. I was surprised to hear that Michael has sold more albums than Tony... I wish I could go backstage and hear conversations between those 2... :D I hope they get to work together at some point, I love Tony! Thanks again Sylvia, take care. Hugs, sincerely, Sylvie from Canada

Hi Folks and here is latest news about Michael's teeing off times .........

Friday, 18th January on the Nicklaus Private Course and teeing of on Tee #10 at a time of 9.40 a.m.  His partner for Friday is Charles Howell III.

Saturday, 19th January on the Palmer Private Course and teeing of on Tee #1 at a time of 9.20 a.m.   His partner for Saturday is Brendan de Jonge.

Michael is playing off of a 12 handicap.

Absolutely wonderful news that I just have to share on here right now and it is that the scoreboard at the Pro-Am Comp is showing Michael has having gone through the 15th hole with a score of .......  -12 .......and he is in the lead in the amateur field and the amateur field contains approx 156 players.    His professional partner, Ricky Barnes, is lying in second place in the professional field with a score of -6.   "Magic Mike" is on a roll and here's hoping it continues !!!!! LOL    Will come back in when final scores have been posted !!

Thanks for the update Sylvia!!! Way to go Michael!!!!