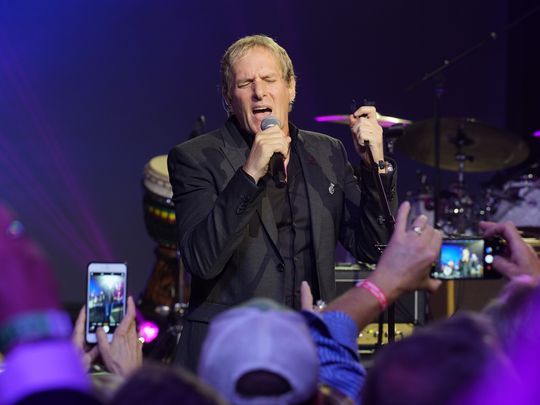 Michael Bolton wowed the sold-out crowd by joining the Rheneypalooza Jam as a surprise guest at the JW Marriott Desert Springs.

Have found this interesting article/interview Michael has given "Flight Centre" and especially because at end he mentions going to South-East Asia on a talent finding project end April/May.  Have sent details to Gail so will be more than interesting to hear what this latest "adventure" is that Mr. Bolton is getting himself into !!! LOL

Hi Sylvia, terrific article, thanks for posting! It's a little hard to tell when it was published though. When I read the mention of Canada in his travel plans, I tend to be sceptical, which is why I'm wondering. There's also the fact that they say he's 63, which might be a mistake, but I'm still curious. Thanks again Sylvia, take care. Hugs, sincerely, Sylvie Qc Canada :D

Michael has just sent below tweet with beautiful pic of himself in Zermatt, Switzerland.  It is a selfie and he is standing in one of the main streets outside a hotel and in the background are the snow covered mountains.  I know exactly where Michael is because I had considered going to Switzerland and looked at all hotels etc in Zermatt wish I had gone because he is standing outside hotel I fancied BUT then he announced Poole, so forgot all about my wee dream !!! lol  Here, BTW, before I forget is his tweet ..... 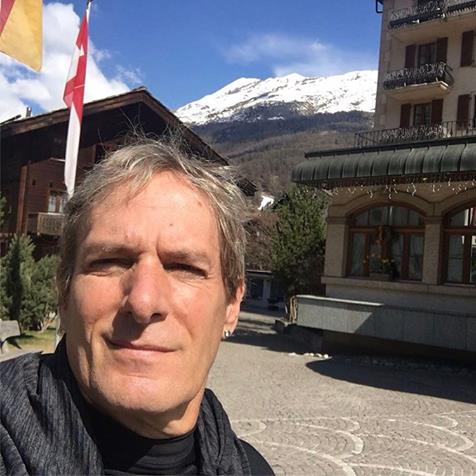 Thanks for all information & articles.

Michael has sent tweet with pic of himself in Berlin.  Pic is a selfie with a beautiful statue or what looks like warriors and horsemen just over his shoulder and looks as though he is standing in a square and you can see buildings as well in background.  Will check what the statue is and if find will come back and report !!! LOL  Here is Michael's tweet and pic.... 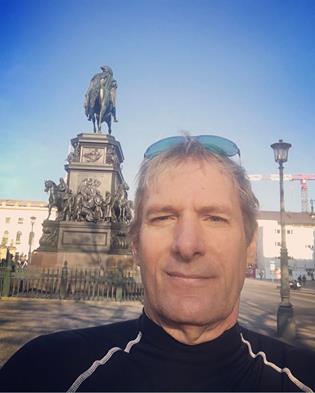 P.S.  It is a statue commemorating Frederick the Great of Prussia who was born in Berlin.

Michael has posted to both his FB page and Twitter with comments and pics.  Firstly here is comment from FB along with pic which shows Michael standing in front of Cologne Cathedral

"Breathtaking cathedral in Cologne Germany!! I feel lucky and grateful to be able to explore so many beautiful locations with my job! Where do YOU dream of going???" 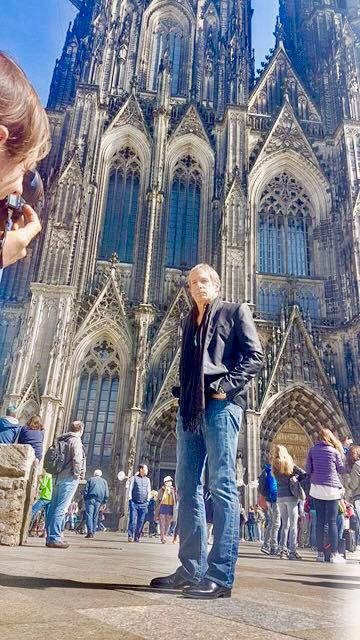 ..... and here is tweet with pic which shows him standing by private plane with pilot. 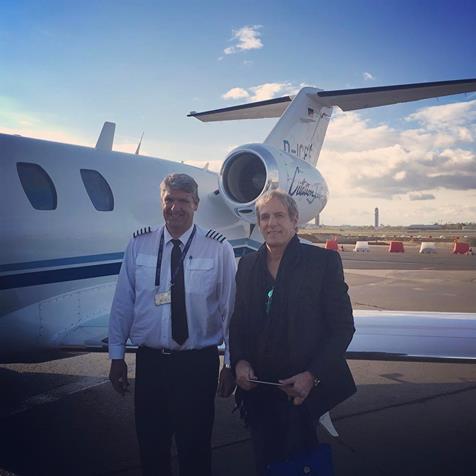 Here is translation of article along with beautiful pic of Michael which says he is sitting in the Hotel Radisson Blu, Golzheim  Golzheim. is a district of Dusseldorf

Düsseldorf. In the comedy series "two and a half men" there's this episode, in which main character Walden of his girlfriend makes a marriage proposal and superstar hired Michael Bolton for the background music. He smashes the lovers game and repeated his version of "When a man loves a woman" - only a few lines, because the application is completely wrong, the singer is stopped abruptly. The scene is really funny, and she shows a different side of the two-time Grammy winner: he takes himself on the grain, is funny and ironic, and he is also yesterday, as he sits with a handful of journalists in Golzheim hotel rooms. A waitress sees that Boltons latte is almost empty (first he has by the way out fished the biscuit in the foam pushed, and eaten), and asks if everything is alright is. Bolton says no, seriously – the woman froze. He points to the TV, where in the news the passenger reported, who was dragged from a plane: "That, that is absolutely wrong." Then he smiles, until the woman panting.
Bolton is also a little tired, he spent the morning in the Middle ZDF Studio, with the programme "Volle Kanne". Someone who is of course he saw nothing therefore of Düsseldorf, the question, he can not remember also to have sung here: he counts "Berlin, Cologne, Hamburg, Munich, Frankfurt...", and when he eventually arrives at Stuttgart, you can see a the appearance just was one of thousands. He was indeed quite times there in December 2010 in the former Philips Hall. In the luggage he had hits such as "How am I supposed to live without you" and his version of "somebody To love". The classics so that the image be as, Yes, cuddly singer; characterized as sustainable for which his fans flock still in his concerts. The star knows this, and so his new CD "Songs of Cinema" is one on which he interprets classic, this time from films again. "At some point in a concert comes the moment in which I have to say: now, a song from my new album", he says. "Since it helps if it's a song, the fans already love - then they must find my interpretation still good." He has the pieces such as "Stand by Me" or "old time rock carefully selected 'because when they arrive, I will you sing often, since I should like them'." His hits but never would he boring claims the singer, who has sold more than 50 million albums, and it is believed him given the enthusiasm with which he talks about his love of music. "I wanted to succeed of course, but I mainly wanted it to continue to do what I'm doing." He remembers a meeting a few days ago with a long-haired street musician in Berlin. Whose voice he liked and had remained standing, he says schnipst with the finger, "and it returned me immediately many years." Suddenly the 64 tells of the days as a young (and langhaariger!) Singer in California, where he earned the money for lunch with street music, "and sometimes we needed something extra for gasoline." He talks about heart and passion and the joy of success. By necessity, his talent to work hard, not to rest, his motto: "The biggest enemy is good from great.". And the PR work: to be known in Norway he gave once 18 interviews in one day, he says, plays a scare from half-asleep, you will feel guilty shortly, but Bolton smiles.

According to Helene Fischer asked as he is ("great voice"). And when it comes to his new projects, in which he again will be in front of the camera. His great satirical special Valentine's day at the streaming service Netflix, where he took his schmaltz image on the grain (and still much sang), should be not the last. "My daughter wrote me, it's the wacky off that I would have ever done. "And she loved it." Nicole Lange 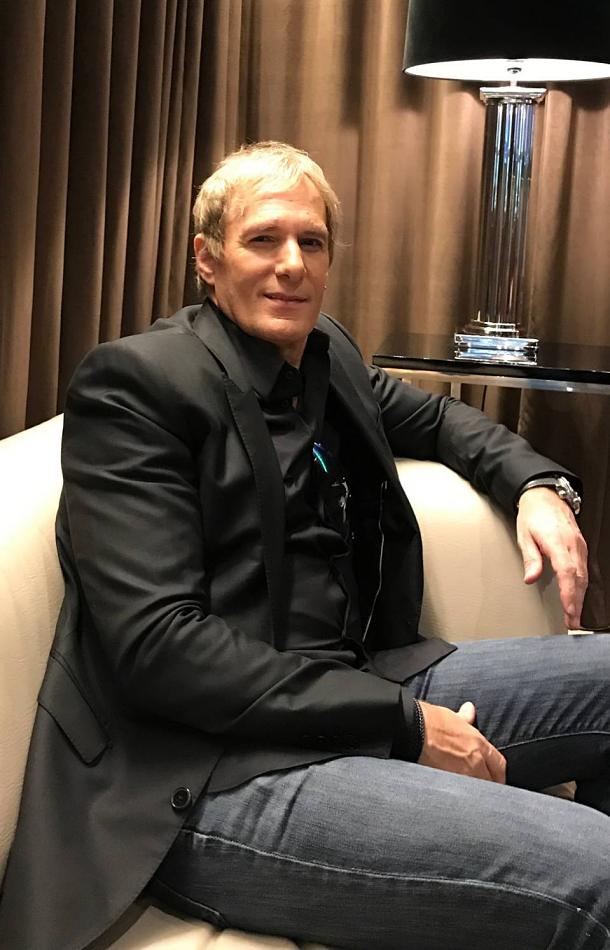 Thanks a lot for the link and the translation Sylvia, much appreciated, take care. Hugs, sincerely, Sylvie Qc Canada :D

Little video with MB in Berlin