Well folks here is a review before the show has even started !!!! LOL

Made my way to Colston Hall and as I approached what did I see but the tour bus and here is picture for you all: 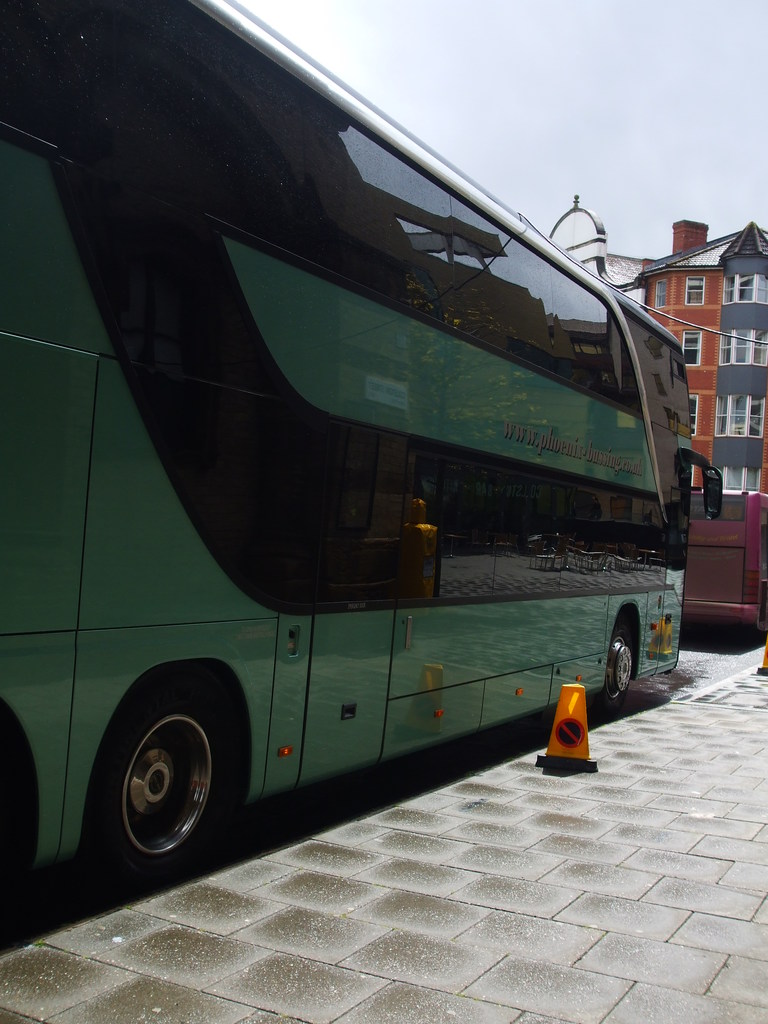 Unfortunately no one around but I decided to sit outside and have a drink as café/restaurant attached to Hall has tables outside and the sun was still shining brightly and of course where I strategically placed myself I had view of bus.    Nothing happened except a huge dirty big black cloud came over and it poured, the heavens literally opened !!!!!! LOL   I obviously took myself inside the Hall and had another look round place and then thought about asking at booking office about time of show in case it was going to be late again but was told that he does have an opening act and it is the same girl who was at Liverpool, Lucy May.  Rain had stopped by time I had come out and so went walking and heading back to hotel and then thought that is kind of daft for it is lovely now and you might just stand a chance of seeing someone if you hang around so I took myself for little walk right round area and doubled back on to theatre and found a delightful little quarter called "Christmas Steps" and very obviously an extremely old part of Bristol and there are steps and here is little photo of when I had just about reached top: 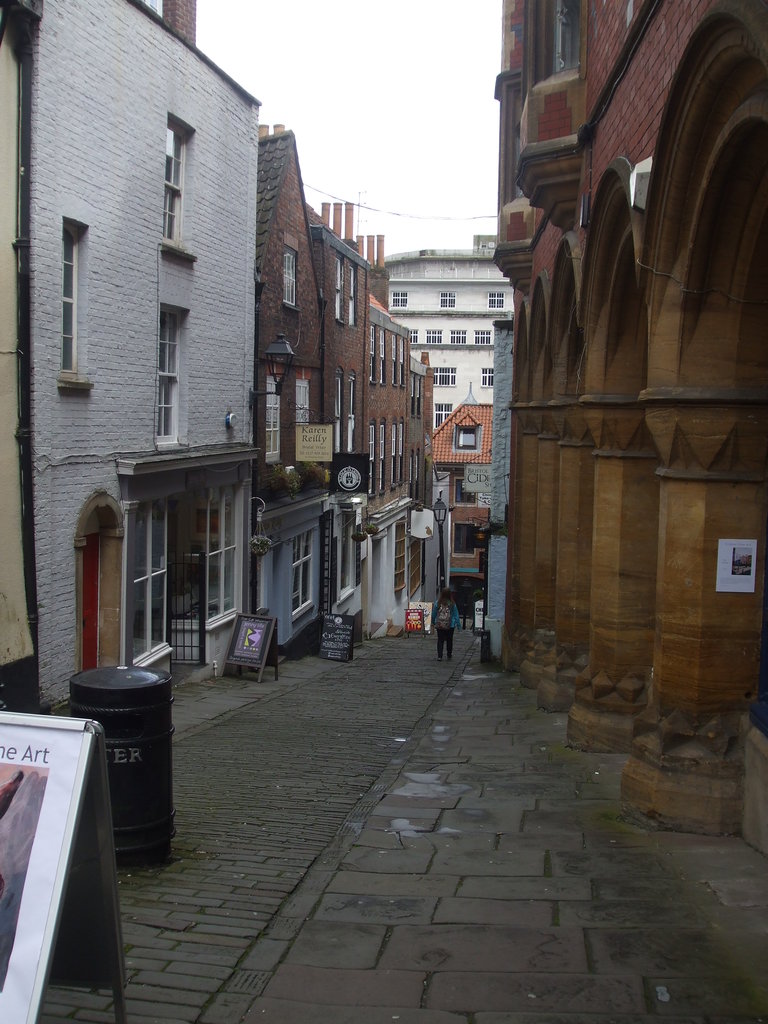 For Sylvie and Robin R the picture is looking back down the stairs and thank goodness they stopped and started and I was able to pause and get breath back and on either side are the tall old quaint buildings which take you back to Dickinsonian times.

As I got to top of steps and started to head back down to theatre what happened but it started raining again so I nipped in back door of Hall and who did I see sorting through all his boxes but Joe so I went over to speak to him and to get a picture of him but OMG he wouldn't let me so here is the only one I managed to get where he couldn't cover his face but it is pretty blurry: 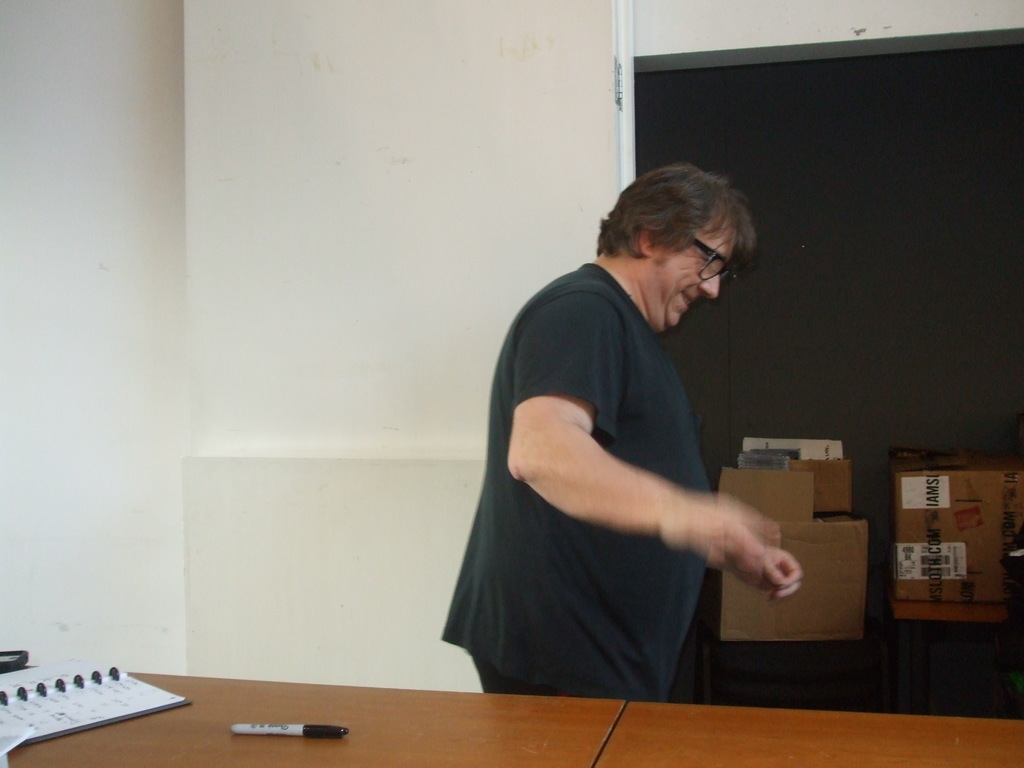 Then I spotted what he was looking at in opening all the boxes and checking them was t-shirts so I asked him which ones he had and he said the BRAND NEW ONES and he was just checking all the boxes because they had just arrived.  So I was OMG I must get one of them tonight so Joe then said do you want to buy it just now and be the first to have bought a new Tour T-shirt .....yeah and of course I said NO and hey what is your next joke !!!! LOL  So we decided that the extra, extra large was just a tad too large for me so Joe went and got the box with the large and opened it and then brought one out and he was busy saying OMG not just the first bought the first one out of the box...we had a good laugh and I thoroughly enjoyed talking to him.   He also said to me would I consider wearing it tonight and I said boy what an idea of course I will but I asked him if it would be okay when they officially, if you like, were not on sale yet, and he said of course you can wear for will be more than thankful for the advertising and he said to me that if I make a point of going to see him tonight and am definitely wearing t-shirt he will get a signed photo for me.  I think you can all imagine that the Wee One is grinning again today, from ear to ear for this Bolton Adventure is sure turning into something I am NEVER going to forget and to think I'm not even half way through it yet...oh boy, little tears of happiness are flowing now !!!! :)   Needless to say I got straight back to hotel room and tried on t-shirt and here is the evidence that I have got the very first one sold and I have actually sent tweet to Michael and after this I am putting it out on my FB page for I sure will support Michael Bolton and do every bit of advertising I can for him and have also taken picture of back so that you can see what is written there.  For Sylvie and Robin R the front of the t-shirt has written at top in gold "Michael Bolton" and then it is the picture of his face which is on the book cover and to right of that as you are looking at it says "The Soul  :  Of It All" and on the back it has written in gold "Michael Bolton"  "UK Tour 2014" and then is followed by list of dates and venues and the t-shirt is black and I love it and by God I will wear it with pride tonight and it is pretty terrific for sun is shining again and so there will be no jacket on......new nom de plume...."the human advertising t-shirt placard".  Here are photos: 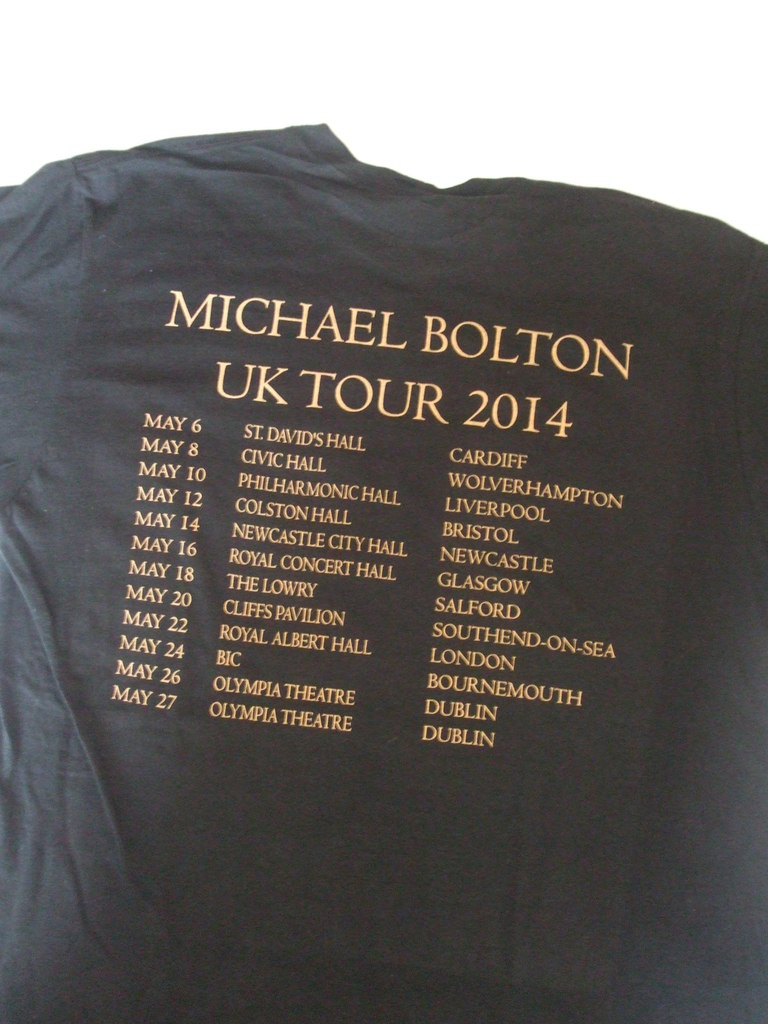 Hey Sylvia, as I wrote on your blog, you're getting to be a pro at this, thanks again for the update! There's something to be said about being enthusiastic if it's getting you a signed picture! :D Thanks again for sharing Sylvia, take care. Hugs, sincerely, Sylvie QC Canada

P.S.: Thanks for all descriptions. :D

Hi Sylvia, thanks for sharing your latest buy, I am very sure you will catch Michael's attention tonight.  Enjoy another great show ... I am looking forward to another vivid and enthusiastic report of yours.

I consider to travel abroad for future MB shows, I did neither get VIP tix nor tshirts in Germany :o( B

Hello Sylvia, thank you so much for the great photos and the detailed report.
Congratulations on your new T-shirt. It fits you well. :)  Have fun tonight at the concert.

Permalink Reply by Carol Bailey on May 12, 2014 at 7:14pm
Ah bless you, I can totally understand how you feel. Enjoy every moment.

Thanks for sharing those interesting pix.... Have a blast tonight...I see you are not only a paparazzo but also a shopping queen :-) Tell me one thing: Did you buy the arabic version of the MB shirt " right to left" ? :-))))  Please no do wash it to HOT,ok?

Cheers, and be happy!

Permalink Reply by Kathy Tulsa on May 12, 2014 at 10:00pm
Smiling for you, Sylvia, one of those little unexpected surprises !!. Thank you for posting and for the photos. Have a fantastic time tonight :). Hugs,

Have just picked this picture up on Twitter and it is of Michael out to dinner last night San Carlo's in Birmingham: 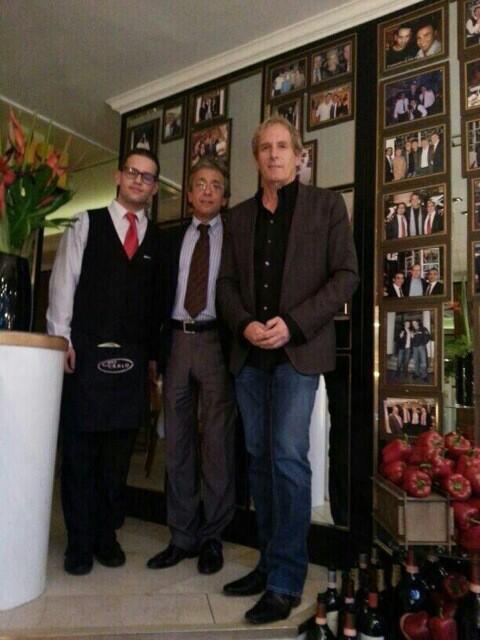 For Sylvie and Robin R photo shows Michael standing in an area where there are pictures of various celebrities posing with, I assume, owners of restaurant and restaurant group, on the wall and Michael is standing with the same two gentlemen in this photo.

A few things here. Olive I think you've been out here before. Did you & Sharon see Michael in Wales as well? Cool if so. Sylvia, awesome about your t-shirt. Now. How cool is that? Neat getting the autographed photo as well or you'll be getting it. Thanks for all photo descriptions as well.

Sylvia many thanks for all your reports. It is as if one went on the trip himself! Do not stop! Continue!

And now I wish you a wonderful, unique evening over again!!!