2010 Concert Tour Reviews-Please share your reviews with us here!

Hi everyone, I thought it might be nice to have a thread for everyone to post their concert reviews in again like we've done in the past. It's such fun hearing about all the shows and everyone's experiences and see their photos.

Anyone attending, please post your review.  Its exciting that Michael and his band are hitting the road again and traveling the world!

I hope you all don't mind I started this thread for concert reviews.  I'm looking forward to reading about everyone's experiences!

Permalink Reply by Sylvia on September 15, 2010 at 1:43am
OH CAN'T WAIT FOR THE REVIEWS!!!
HAVE FUN AND DON'T FORGET TO BREATHE,
WILL HAVE FINGERS, TOES, LEGS, EYES, AND ANYTHING ELSE THAT I CAN CROSS FOR YOU. LOL
All our best from Texas- Love Sylvia

Permalink Reply by robin rehder on September 15, 2010 at 9:16am
Well everyone. What can I say. For one, my transportation worked out ok both ways. I was scared to tell you the truth since their computers were messed up beforehand when I went to&from my therapy which that worked out too but you don't want to hear that, right?

I have to say the folks helping me around the venue were totally awesome. They will definitely get a thank you from me that's for sure.

Like I said, Michael's show was awesome. I might add that the band sounded good too. I'll tell you the songs on another message as I have to get up early to go to Vegas to see Michael in henderson. Wish I could go to Lancaster&so forth.

His voice was just oh! so! amazing! God bless him. His as I'd say love calls or Bolton yells were good too. Some folks say woo hoos. :) but anyway, when he did Nesindorma, there was a standing ovation&I cried. His voice is oh! so! powerful at the end of the song. He didn't do Rock Me Baby which was fine but he did end it with Georgia. Thinking back to the earlier days, he has calmed down. I love it though I love his wildness. :)

I'm flying high. The adrenalin is running but I've got to get some sleep to get up early for my next venture.

I have to say. if there are anyone who is perhaps disabled in anyway&have a fear to go to a show alone, don't be. people generally are extremely kind. I didn't get to hold Michael's hand but another place, another time.

Robin the boltonnut from L. A. CA

With a review from Cerritos.

Permalink Reply by Robin on September 15, 2010 at 12:39pm
Thanks Robin, Sounds like you had a fantastic night. So glad the transportation worked out well for you girl.. Glad to hear MB's voice is sounding amazing as always.. Bummer no Rock Me..Hope you get that one at the next show..Enjoy your next show, waiting to hear from you. Have fun in Vegas!!

Permalink Reply by Lynn Arnold on September 15, 2010 at 6:39pm
Thanks for the review Robin! Sounds like you had a great time. Enjoy Henderson!

Permalink Reply by Jennifer Steadman on September 15, 2010 at 10:19pm
Aww Robin, I'm so pleased that all of your transport worked out ok for you.

I can sense that you are still buzzing after the concert and who can blame you.

Thank you for a wonderful review. I love Nessun Dorma, it always sends a shiver of excitement down my spine.

Although I dont go to the concerts alone, I am in a wheelchair and have found that the majority of the staff at the venues are extremely helpful and will do whatever they can to make my visit a happy memory for me. They take my wheelchair and put it safely in a cupboard and then bring it back to me after the concert and help me with the lifts etc as quickly as they can. I sent a thank you letter of commendation to the staff at the RAH last year and for all of the years before that.

Permalink Reply by robin rehder on October 6, 2010 at 10:58pm
I'm way behind but thanks to everyone for their comments on Michael's show in Cerritos.

yeah, Most of the time, I'm alone at concerts&even if i go with people, our seats most of the time aren't together. Sometimes they are. Carole, sorry i never met you.

Robin the boltonnut from L. A. CA

Permalink Reply by Kerie VanWinkle on September 16, 2010 at 12:07am
Sounds like a wondrerful night for ya....I am glad he included Georgia this time, I love that song!! Maybe Rock Me Baby tires him out too much LOL!!! I am glad he seems to be holding up ok...Looking forward to your next review..Have a great time....
Kerie

Permalink Reply by Robin on September 16, 2010 at 1:05pm
Any fans attending the Lancaster, CA show tonight? Please share your review with us afterwards! Have fun!!
Robin :)

Permalink Reply by Silvy on September 16, 2010 at 4:24pm
Thanks Robin for your review!
love

Permalink Reply by Robin on September 18, 2010 at 4:55pm
Any fans attending the show tonight in Henderson, NV at the Sunset Station Hotel & Casino, please share your reviews here. We would love to hear from you! Have fun!!!
Robin :)

Permalink Reply by Michael Bolton Photos (Jan) on September 20, 2010 at 4:45am
Hi guys,
I attended the Henderson show last night with my hubby and with BB Robin R. Good show! How could I not go? I live in Henderson! Michael was just down the street! :) It was great to see several BBs from England and Europe there, as well as some old friend BBs from tours of years gone by. There was a hot wind blowing and keeping everyone's hair a bit ruffled that night, but to so hot as to be terribly uncomfortable.

I guess the most remarkable thing about the show was that Michael had Chelsie from Dancing With the Stars with him. He said that since he's touring so much that she came out with him so they could rehearse while he's on the road. She came out onstage and chatted a bit with the audience. At the insistence of the audience, they danced a little turn. I'm afraid I have to say that Michael needs to keep practicing! LOL!

I have to say that I still find it very strange to see this new band with Michael. I do remember Brian Becvar, who was on piano - he's been with Michael off and on for a while, and Michael Lingdon on sax - he was with Michael when I saw them last spring. And Nelson Braxton on bass. He's been with the band while too. But I still miss all the old familiar faces! I stopped counting the Michael shows I've been to when I passed 60. I'd guess the count is more like 70 now, and after so many shows and so many years, you kind of start to think of the band members as buddies too, and you miss them in their familiar places. There have been many changes to the band over the years. I guess the problem this time is that the change happened pretty much all at once.

Well, as I said, the show was good, Michael looked good and sounded good, the house was packed, and the audience was very appreciative. Michael went into the audience at half-time for WAMLAW, and the encores were HAISTLWY, Rock Me, and Georgia. 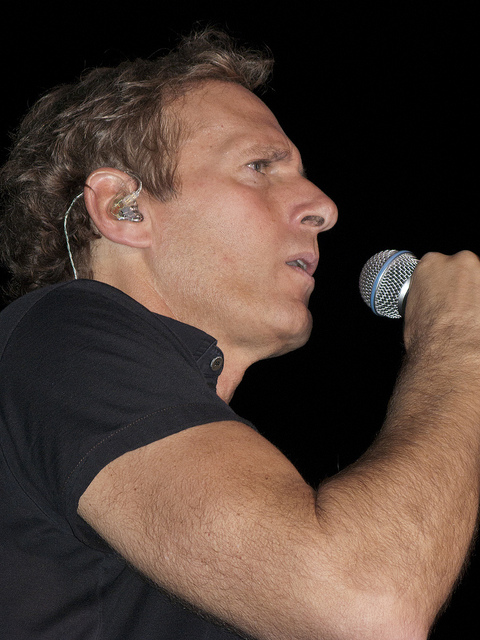