You're teasing Chip. I've never met you or your wife up here but I take it that those were pictures you sent? Hope you both will be able to come out here with reviews, please? Thanks. If I had won the $578 Million last week, I would have been there&done the whole USA tour. :)))))) but $$$$$$ don't exist. Shucks. Neat gift for your wife's birthday. Now how cool is that? boltonnut from L. A. CA who Loves life & Michael Bolton :) &I have a friend who lives there on the coast. I would have stayed with her. I can dream, right. Wish I could go tomorrow night as well but.....Reviews folks.

Robin CA below I have given the link into Chip's thread that he started where he has been posting about the concert since July and he has, in fact, put his review over there.    Hope you can follow it and get in and read but if not let me know and I will copy and paste what Chip has written and send to you - okay ?? :)

Permalink Reply by 0pwxwvug15cbo on December 9, 2012 at 6:14pm
Thank you for some great photos, Chip, and I read your review. I hope you and your wife enjoyed the concert and would love to hear about her response to your surprise for her.

Firstly.....below is a link to Michael performing "Georgia" at the Hard Rock Hotel & Casino in Hollywood, Florida, on 4th December and although Michael and the band just about resemble dots on the landscape the sound quality of the video is great....first few bars of Michael L's playing are a little harsh but after that it settles down and is brilliant !! :)

Secondly......here are a few of Gillian's photos from the show at The Mahaffey, St. Petersburg, Florida, on Thursday 6th, and I have brought these photos over from amongst Gillian's 112 photos that she took...LOL....(she wanted the show documented in photographs and I really do believe she has achieved it !! )....and they are to let you see the change in attire of Mr. Bolton for the first couple of photos show him with his grey tie on and then we see him with a pair of shoes that I think look FANTASTIC and I want to see more of those shoes.....darn annoyed that his denims have slightly flared bottoms for they kind of hide the detail in the shoe and for Sylvie and Robin CA the shoes look the softest of leathers, or the toe could be canvas, and they look to be of a cream, don't think white, with either brown or black detail on the uppers which is leather, I think brown, but what you can see looks terrific.....wonder if he got them in Shanghai's Santoni Boutique ?? LOL    The last one I have put in I love and especially that extra long scarf .....enough from me here are the photos................................... 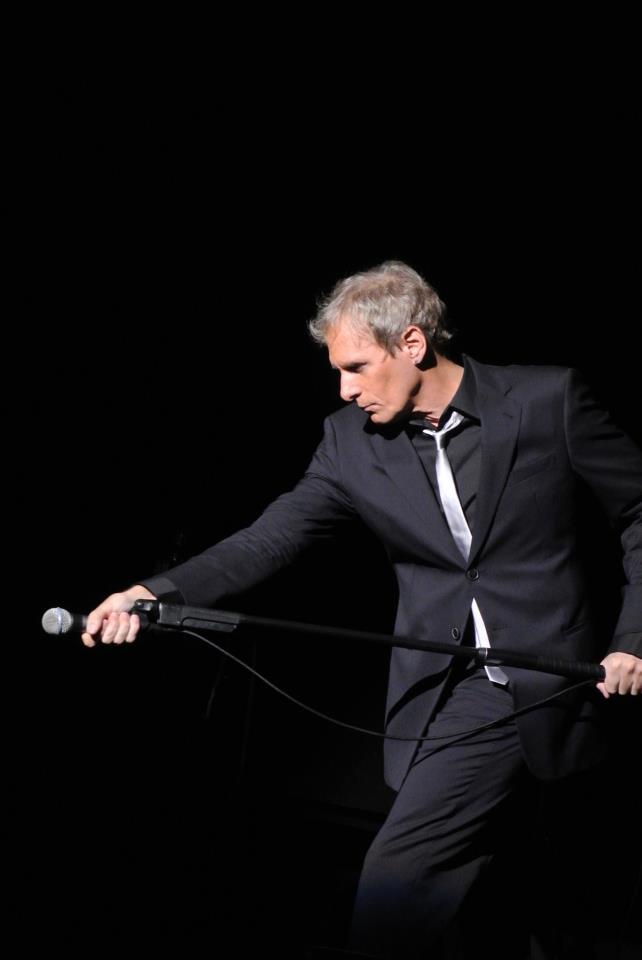 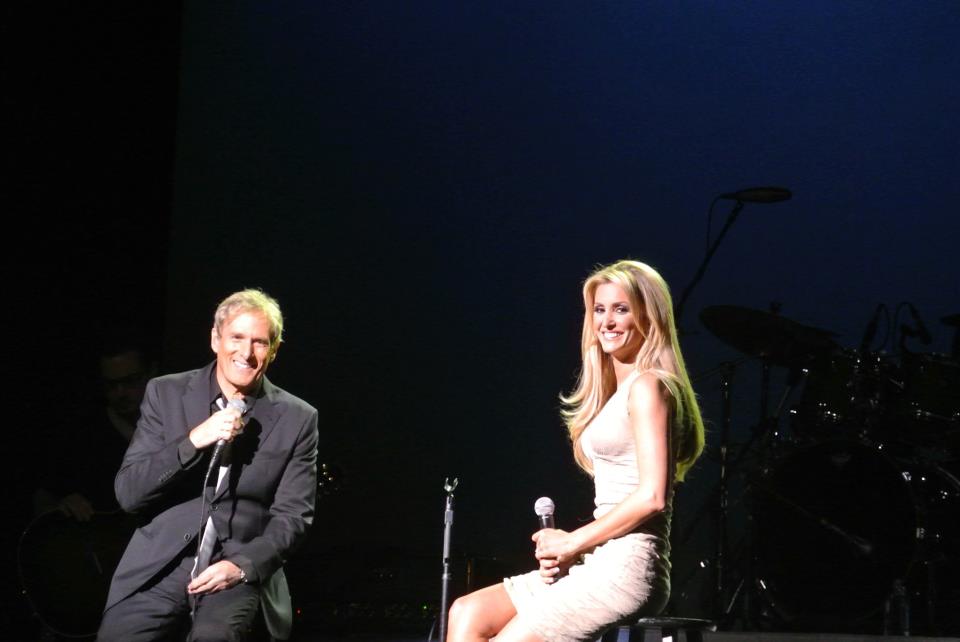 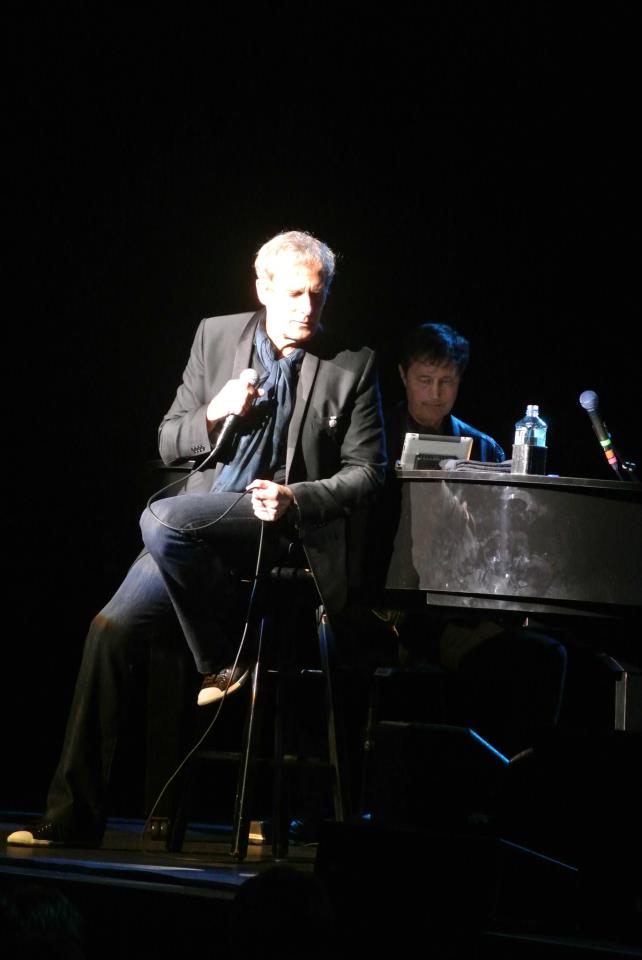 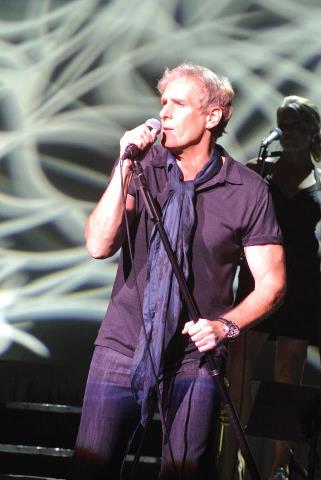 Gillian is going to come in with her review quite soon but as I said before she is still on holiday and hardly wants to use up hours of sightseeing sitting writing a review but what she has been doing is, when she has flown between cities, then she tries to catch up on stuff and has promised that she will try and do that soon for us but no matter when, definitely at some point in time, she will come in and give us a review.

Great pics by Gillian!!!! Thanks for posting Sylvia..Like the silver tie and the scarf both on MB!!!LOL Great pics!!!!!! We welcome Gillian's review when she can catch her breath and post it for us!!!

Looks to like he put on the tennis shoes early in the show that he's been wearing for the 2nd half with jeans!! They look familiar!!!

Thanks for all descriptions girls&Sylvia, Thanksfor the thread also, Sylvia. Wow! I wonder if it's the same scarf that brushed against my left hand. wow! There's so much out here to read. Wow! I'm not the greatest with the computer but I'm holding on to this to check out Chip's thread. Thanks. Boltonnut from OL. A. CA who loves life & Michael Bolton :)

Katia has said about all the photos and especially the last one, she likes, with the jeans !! :)

I have just thanked her and said that it is good to see her on here for Katia has only joined the forum recently and only been on one or two other threads.

Hi Katia and welcome to our forum! I left you a message on your page so if you need help, let us know. Take care. Hugs, sincerely, Sylvie from Canada :D

Well, I'm sure there will be more shows for Chip's wife&perhaps with the grace of God they'll meet him. Where there's life, there's hope. :) boltonnut from L. A. CA who loves life & Michael Bolton :)